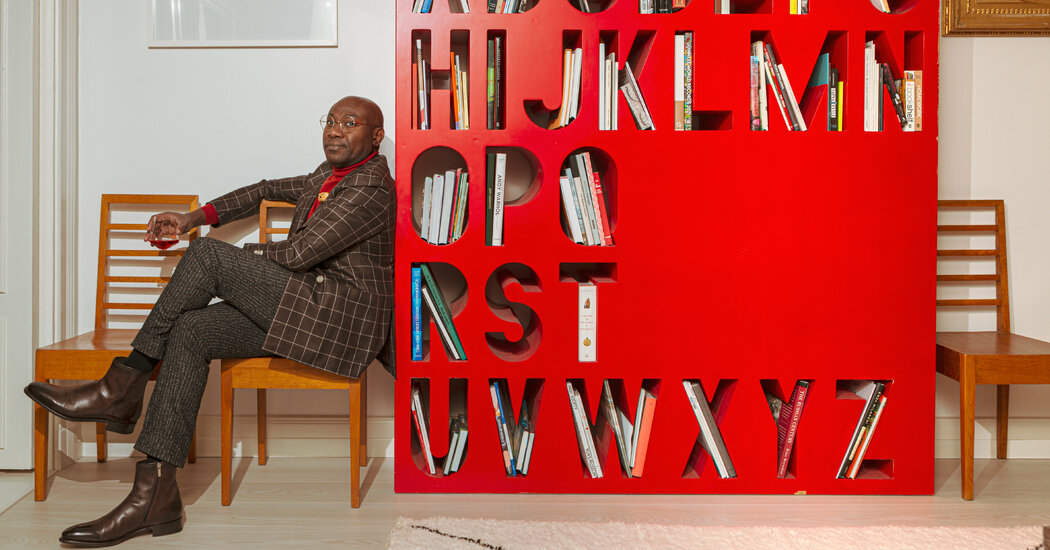 HELSINKI, Finland — Lincoln Kayiwa has designed a line of furniture and home accessories made of birchwood and granite, porcelain and glass — materials that are no stranger to this Nordic country and its legacy of skilled craftsmanship.

But while his creations — everything from chopsticks to chopping boards and garment racks to dining room tables — possess the clean lines and minimalistic forms found in contemporary Scandinavian design, they also embody stories and memories from his upbringing in Uganda.

A 10-foot bench named Joki, which means river in Finnish, has ergonomic curves and contours inspired by the Nile, a section of which meandered past the boarding school in rural Uganda that Mr. Kayiwa, now 42, attended as a teenager. Crafted from birch plywood, it separates into four parts, one of which is flat-topped and can serve as a table (starting price of 53,650 euros, or $62,455).

The Nzela, a multipurpose table, has his grandmother’s name as it is reminiscent of the food-laden family gatherings he enjoyed in her rural Ugandan home. The table consists of three flat-pack planes that snap together without screws or hardware. Designed as a module, it can be joined with others to accommodate extra food and guests (starting at €11,808).

The family gatherings “were special times away from school, surrounded by family,” said Mr. Kayiwa, who moved to Helsinki in 2001 to attend design school and has since become a Finnish citizen. “It was all about food and family and just sitting around the table, just being together.”

While he readily delves into such stories, Mr. Kayiwa is just as quick to add that he wants his clients to build their own memories through his work, and he invites them to engage in the design process. (His pieces are made-to-order in numerous sizes, colors and materials, almost all made by hand in Finland from local materials and sold through his online business, Kayiwa.fi.) “I want to make things people can bring their own stories to,” he said.

He recently released an artistic version of the table in the vibrant color-block motifs of the Dutch abstract painter Piet Mondrian, one of several artists and designers who, he said, have inspired him in his work. Since the start of the coronavirus pandemic, he has been designing at his home, an ornate Jugend-style building in the Ullanlinna district of Helsinki. (Jugend is a term for a variation of Art Nouveau.)

The stylishly decorated apartment houses a collection of contemporary art, photography and design pieces that Mr. Kayiwa has gathered over the years, including a set of chairs designed by Eliel Saarinen, the Finnish-American Art Nouveau architect. The architect championed design principles Mr. Kayiwa realizes in his own work: that everyday items can be modern, decorative and functional.

“The motivation is always that they should look good, even if they’re not in use. They should be like sculptures, ” Mr. Kayiwa said of his designs, gesturing toward one of his pieces, a large, pyramid-shaped candelabra cast in white porcelain and gold. Named Faith, its shape was inspired by the Egyptian pyramids, he said.

“If I took the candles out of this, it wouldn’t be an eyesore,” he said of the piece, which holds 21 candles. “It would still be a form of sculpture. You don’t have to put it away when the guests are there and it’s not in use.”

Riku Riippa, a sculptor based in the Finnish city of Kokkola, owns a Faith candelabra. He said that his family had not used it yet but that they enjoyed its presence in the house and looked forward to filling it with lit candles on a winter’s evening.

“In my opinion, Lincoln has a brilliant sense of form,” Mr. Riippa wrote in an email. “Most of his works have a beautiful, organic feeling., For example, Faith reminds me maybe of some kind of volcanic structure, like something termites or ants might build.”

Mr. Kayiwa is the son of an architect whose work included private homes and government buildings. Watching his father navigate such diverse architectural challenges piqued his interest in design, he said. And his early schooling at Catholic boarding schools led him to question things.

“That strict Catholic environment, I think it kind of led me always to ask, what if I did the contrary?” he said. “It started from there, this curiosity. This feeling of, why should things always be this way? Why can’t things be different?”

His first brush with modern design, he said, came in 2001 through a slide show presented by an American guest professor at Makerere University in Kampala, the Ugandan capital, where Mr. Kayiwa studied design. With their combination of beauty, humor and functionalism, the works of Finnish designers impressed him most.

“I was like, how can this small country have so many designers?” he recalled. After the lecture, he Googled Finland.

He moved to Helsinki that same year to attend the University of Art and Design Helsinki, now Aalto University, where he earned a master’s degree in design in 2007. Upon graduation, a university committee selected his work for support, which eventually led to the creation of his own design studio, Kayiwa.

More than a decade later, his business has been turning a profit, he said, selling to a largely American clientele. Among his most popular products, he said, are ergonomically designed housewares — chopping boards, rolling pins, candleholders and citrus reamers — handmade in four types of Finnish granite.

But his best seller by far is Carat, a line of diamond-shaped drinking glasses that sit askew, on one facet of the diamond shape. Mr. Kayiwa said he had problems with counterfeits — resulting in a lot of cease-and-desist letters and some settlements — but he now sells 150,000 pieces annually from the series, which includes Champagne buckets and carafes, via retailers and on Amazon. He also offers pricey handblown versions of the glassware on his website (starting at €140).

“He has done a great job with finding his way to becoming an international designer,” Helena Hyvonen, a former dean of Aalto University, wrote in an email. “Creativity and an entrepreneurial attitude, combined with talent, is not an easy combination. I have a lot of respect for his designs and his way of working.”