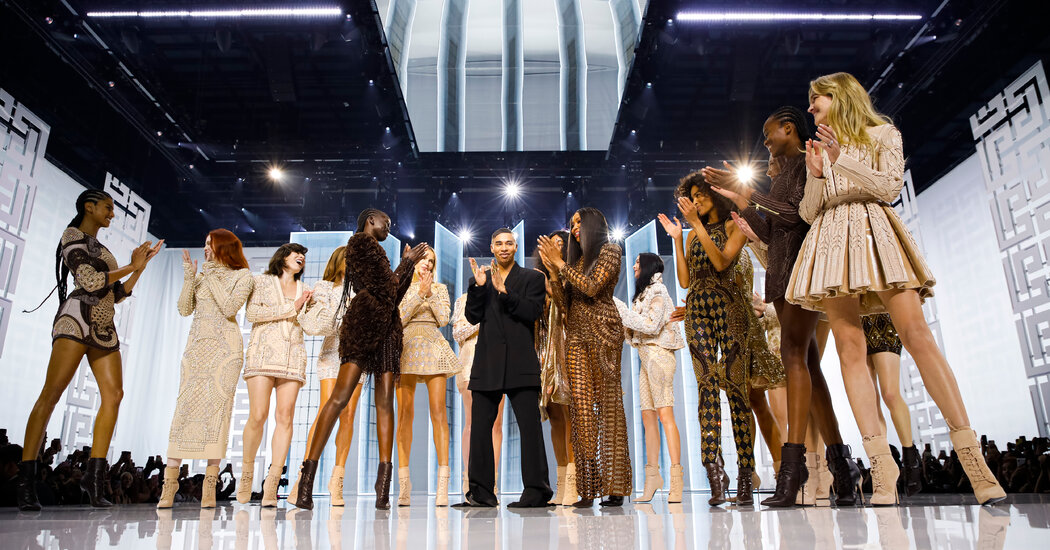 PARIS — When Olivier Rousteing took over the house of Balmain 10 years ago, the fashion bookmakers weren’t giving him great odds for success.

First of all, he was only 25. Second, he was pretty much unknown. Third, he was the only Black designer at the top of a heritage couture house at the time, prioritizing inclusivity when most of fashion barely knew the word. Fourth, the decades he seemed obsessed with — the 1980s and ’90s — were a little too fresh in most viewers’ minds for comfort. Especially in Mr. Rousteing’s particularly bombastic, trussed-up-in-glamour way.

No wonder on Wednesday night in Paris, he had a “Festival” — a mass open-to-the-public experience — to celebrate both his decade at the house and just how definitively he has proved most of the pundits (including this one) wrong.

A concert hall on the Seine was packed not just with industry insiders but also 6,000 members of the Balmain Army (tickets involved a small donation, all proceeds going to (RED) and its fight to end AIDS), resplendent in rhinestones, pearls, velvet, leather and thigh-high boots. They were considering customized sneakers, getting ready to listen to live performances from Doja Cat and Franz Ferdinand and watching a fashion show.

Featuring, as it happens, Naomi Campbell, Precious Lee and a host of other famous models, including Carla Bruni, the former first lady of France. Beyoncé sent a special recorded message.

As an event, however, it was even more symbolic than it appeared. And not just because of the oft-repeated truism about being together after the pandemic or because, by opening the doors to the public in such a major way, Mr. Rousteing also proposed a different blueprint for what to do next.

Rather, Mr. Rousteing said backstage, he had been badly burned in an accident last October when a fireplace exploded in his home. He was in and out of the hospital for two months and recuperated throughout the spring and summer; he only recently stopped wearing turtlenecks to hide the scarring on his body. He said he still wears two tubular gold rings on every single finger (one at the base and one between the top knuckles) to cover the residual effects on his hands. This was the first time he was talking about it, he said, and the event was in part his declaration of recovery and freedom.

And the fact that his personal trauma had changed how he thought about clothing.

“It made me understand how important comfort is,” he said. “And how clothing works to help you show what you can show, and hide what you need to hide, without anyone realizing what you are hiding.” (Plus, he added, Instagram filters and editing helped in his case.)

You could see the effects in the show — and not just the many gauzy bandage dresses, which he said had been inspired by his experience. He has stopped loading on the extras and trussing up his women and men like turkeys, settling into an almost pajama-like suiting, pants puddling around slides so cushioned and bulky they looked like little foot barges, jackets with the backs opened up like windows.

Dresses were still very small and skintastic, but the decoration and the aggressive armorial details were toned down — limited mostly to gold chains, which came blown up as single-link halter tops, rendered 3-D in patent leather, and strung together as a shirt and dress (also made into bags). There was a lot of shirring and Breton stripes. Some blanket-like oversize knits. And at the end, a brief tour through his greatest encrusted evening hits. Almost all the models wore the same set of double rings on their fingers that Mr. Rousteing wore.

“People are always talking about new chapters,” Mr. Rousteing said backstage. “But I don’t think after 10 years you are finishing a chapter. It’s a book and after 10 years, you close it.” He mimed shutting a book and looked at his hands, rings gleaming. The exciting thing, he said, was that meant “you are free to start again.”