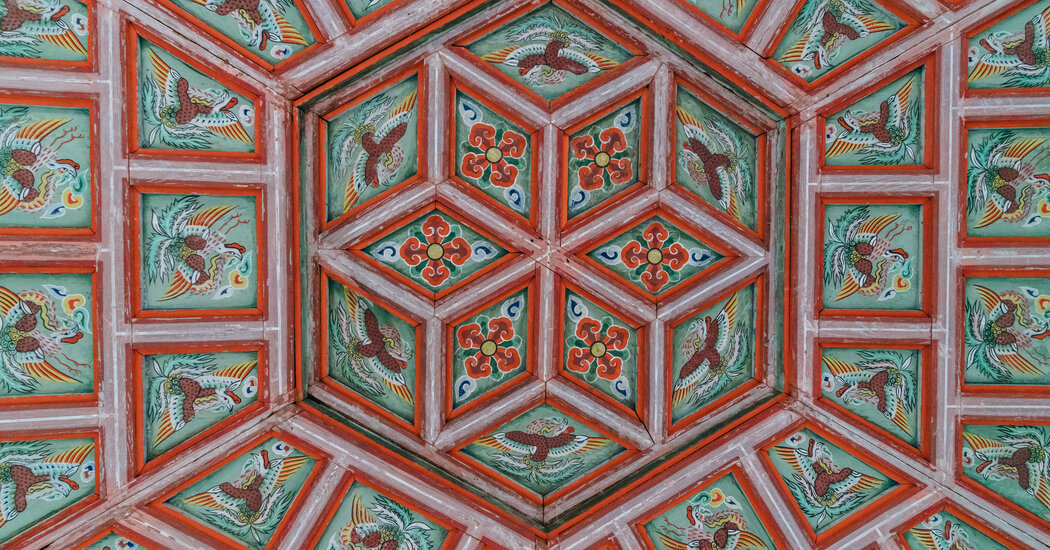 SEOUL — Three years after being dismantled piece by piece, a 19th-century pavilion where Korean royalty once frolicked has been reassembled, and lotus flowers — the ancient symbol of rebirth — will bloom again on its pond in the spring.

The Hyangwonjeong Pavilion, a 450-square-foot hexagonal jewel box of a building constructed in wood for the Korean royal family, stands on the grounds of the sprawling Gyeongbokgung Palace in north-central Seoul. The palace is the largest of five built during the Joseon dynasty, which ruled Korea from the late 14th century to the late 19th century, and stands in the shadow of the jagged hills that rise to the north of the city, with the South Korean presidential palace nearby.

After three years of being hidden behind scaffolding and plastic, the two-level pavilion, which has a single room on each floor, will reopen fully in April but its exterior is complete and the grounds around it opened this month. It stands on the edge of a 58,000-square-foot pond, which also was refurbished. Final landscaping of the grounds around the structure will also be completed in the spring.

Organizers said the work had been a history lesson in how the structure was constructed, almost entirely of pine, and required some modern-day guesswork on how it had been maintained.

Work on the Hyangwonjeong Pavilion — hyangwonjeong means “the fragrance spreads far away” — involved 12 master craftsmen from around the country and about 200 other laborers. The project began with measuring, photographing and creating a complete 3-D computer rendering of the building, which included about 3,000 pieces of wood and 2,000 stones. Each one had to be examined by an expert to determine whether its condition was good enough for it to be reused.

“We were very impressed with what we learned because the pavilion has almost no historical record,” said Jung Hyun-jon, the project manager who is a member of the Royal Palaces and Tombs Division of South Korea’s Cultural Heritage Administration. “We had to dismantle everything piece by piece: wood, stone, wallpaper. This became our historic record.”

Several restorations of the structure had been executed since the end of World War II, but they all failed to keep it from tilting as the timber fittings underneath continued to loosen, Ms. Jung said. The pavilion was constructed with the traditional Korean detail of gong-po, decorative wood features at the top of each column that supports the weight of the building’s eaves, eliminating the need for nails or pegs.

The restoration has shored up the building — records show there has been at least one similar pavilion near the pond since the 15th century — and a wooden pedestrian bridge, based on the original 1880s design and recreated from early 19th century photographs, was constructed. It allows visitors to cross the pond and enter the pavilion from the north, the way the royal family always did. (A metal bridge, built in 1953 and oriented from the south, has been removed.)

On a windy, drizzly Monday afternoon a few weeks before the reopening, the plastic sheets still covering the structure were being blown about and the pond was empty. It is a man-made feature and centuries old — although no one is sure exactly when it was created — fed from a freshwater spring near Mount Bukak, one of the city landmarks just to the north of the palace grounds.

On this particular day, workmen were readying boxes for the lotus to be planted and then placed in the pond. And inside the pavilion, Kang Seong-chan, a baecheopjang or master craftsman in mounting wall hangings of any kind, was working with his assistants, placing wallpaper of a rich cobalt blue on the ground floor ceiling.

Mr. Kang said the hanji paper, a type first made in the third century using mulberry tree bark and the mucilage of hibiscus roots, was a homage to the sky. “When we ripped the pavilion apart, we found the original color of blue on the ceiling and walls,” he said. “We wanted to instill that image and the color of the sky for visitors to dream high.”

Each wallpaper panel, about 13 inches by 20 inches, was marked with a central image of the “su” or “shou” character that represents long life in Asian cultures and surrounded by the zigzags often found in Buddhist and Hindu imagery. Each panel had to be aligned precisely with its neighbors to ensure the continuity of the pattern — which looked like painstaking work but, luckily, seemed easier because the ceiling was only a little more than six feet high.

Several layers of white hanji paper had been applied as a base, to protect the aged wood. Mr. Kang said his team had not found evidence that wallpaper was used in the original construction, but they did find traces of beeswax, which was often used in the past to preserve paper in Korea’s extreme weather.

“We use beeswax because it not only is a traditional adhesive, but it is water-repellent and also repels insects,” he said.

Upstairs, sheets of white hanji paper were hanging to dry, looking a bit like clothes on a backyard line. Later they would be affixed, curtainlike, over the floor’s shuttered windows to provide shade and privacy as well as the feature that likely drew the royal family to this room: respite from Korea’s stifling summer humidity.

“This paper was used in the palace as it is a great way to keep out moisture,” Mr. Kang said. “In traditional Korean windows we hang the hanji paper in two layers and apply rice glue as an extra barrier to the wetness.”

The upper floor’s ceiling was a study in new meets old, as flourishes of almost neon reds, greens and yellows dominated areas of faded color. “We call the decorative painting of our buildings dancheong, and the paint is made from berries that are ground with a stone,” Ms. Jung said. “You can see this very bright paint now because at some point they put in a layer of brace wood to protect the original. There was virtually no corrosion when we removed that wood in certain places, and we simply polished those colors with perilla oil to bring out the original vibrancy and help preserve the wood.”

Later, in a demonstration of just one of the techniques used in the restoration, Mr. Kang altered a strip of wallpaper by vigorously rubbing — no, pushing — a soft rock over a piece of hanji paper atop a wooden mold dozens of times, creating the desired zigzag pattern. The rocks, gathered from nearby rivers, had been made soft by hundreds of years of erosion.

“When restoring cultural properties, we have an institutional system that only master craftsmen in each field can perform the restoration work,” Ms. Jung said. “This restoration was 100 percent handiwork, which is very unusual. No machines were used. We rebuilt it the way they built it more than 140 years ago.”