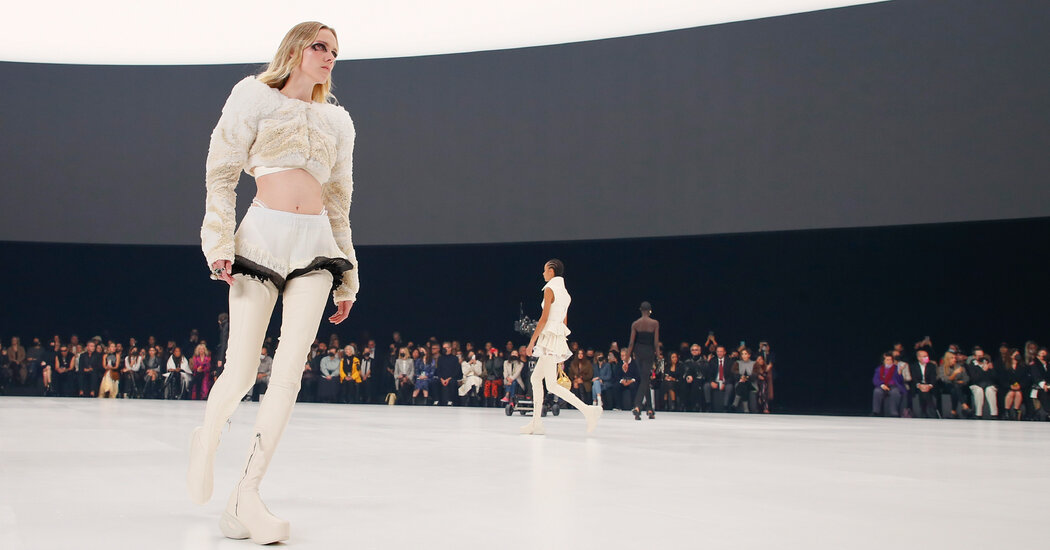 PARIS — In one of the more unexpected runway trends of the moment, the middle-aged model is hot. (Also the edging toward middle-age-in-model-terms model.)

It started with the return of the supermodels in Milan: Naomi Campbell, Kate Moss, Amber Valletta, Shalom Harlow. At times, they seemed to be making more news than the clothes. Now the trend has been building in Paris, moving past the celebrity billing into more insider names who strutted along the catwalk earlier in the millennium being sprinkled among the current Bambi-like crop: Carmen Kass, Caroline Trentini, Natasha Poly, Mariacarla Boscono — women whose bodies and faces look grown-up, and even sometimes lived-in.

It’s a welcome, long overdue change, giving further substance to the idea of inclusivity, even if it is partly to do with the youth of the designers booking them, for whom such women represent formative history.

After all, in a time when fame can last 15 seconds rather than Andy Warhol’s 15 minutes, “vintage” means last season and having been a big deal 15 (or even 10) years ago counts as being part of the legacy past.

To a certain extent that has freed designers to shrug off some burdens of heritage houses, which once weighed heavily on those who inherited their crowns. But it has also created something of a disconnect.

During a preview of the Givenchy show, for example, the house’s creative director, Matthew Williams, was discussing his collaboration with the American artist Josh Smith, who is known for his vivid colors and pictographic symbols. The collaboration was cool, but when asked what Mr. Smith had to do with Givenchy, a couture brand once rooted in Audrey Hepburn elegance, Mr. Williams looked taken aback.

“It’s really personal for me,” he finally said. The implication being, since he was Givenchy for the moment, that should be enough.

And maybe that’s true. The problem is, a year into Mr. Williams’ tenure, it’s still mostly unclear what his Givenchy is.

In his first live runway show (which, by the by, featured Ms. Poly and Ms. Trentini, among others), held on Sunday evening in a stadium-size arena that seemed like another blast from the recent past, there were sharp little jackets with structured peplums atop mini skirts, the square portrait neckline edged in tiny ruffles, worn with thigh-high leather boots with blocky hammerhead soles like a Sci-Fi Victorian naughty maid’s outfit.

Also bra tops and stiff lacy bloomers (really: bloomers) under tailored tweed jackets, and slick black trousers with a sort of skirt flap that hung down in front and kept getting twisted between the models’ legs as they walked, paired with sheer corseted camisoles. Intricately worked boleros made from tiny ruffles of tulle and organza over lacy tap pants that exposed the straps of a chiffon G-string. The men’s wear was heavy on the tailoring, with a military mien, and some shorts over matching tights.

In the middle of it all was the Josh Smith section, featuring paint-washed vulcanized jeans, multicolored jackets treated like portable canvases, and knits of many colors, each with their own contemporary totem: a clown face, a traffic cone. Also some highly Instagrammable accessories (a trick-or-treater’s pumpkin bag, a milk jug), and a very pretty pointillist paillette-strewn gown under a black tux jacket.

There were, in other words, a lot of ingredients in the mix, some of them interesting, some of them ill-advised, but not enough, aside from the padlock and chain hardware that Mr. Williams favors, to tie it all together.

Bruno Sialelli has the same issue at Lanvin, which this time around included baby doll pleated pastel dresses, bouncing floral mini-ball skirts with matching bandeaus, silver tinsel yeti chubbies and shorts (men and women once again in effectively the same clothes) and — Batman! Thanks to a collaboration with DC Comics. On everything from chain mail dresses to sneaker tongues. Because the Caped Crusader and the oldest French fashion house in continuous existence, one started by a woman, have so much in common?

Well, Ms. Campbell did close the show in a tuxedo suit — and a sweeping black cloak.