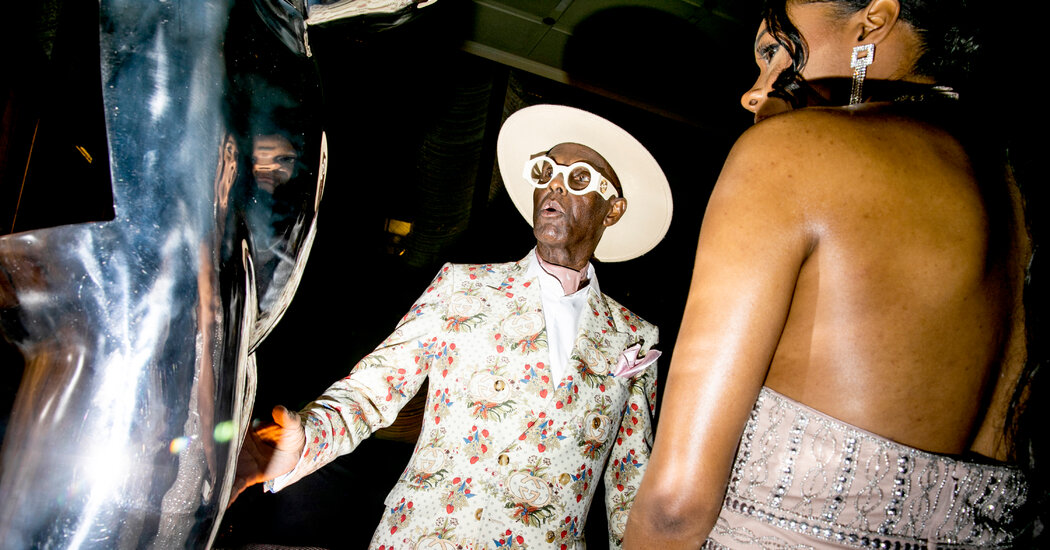 Fashion is not clothes — or, at least, it is not merely clothes. Such was the implicit message of Wednesday night’s CFDA awards, also known as fashion’s Oscars.

Long delayed by a pandemic-enforced hiatus, the event was held at the Pool and the Grill in the Seagram Building, one of New York City’s architectural jewels. The restaurant, trumpeted upon opening (it was then the storied Four Seasons) as the most expensive ever built in New York, proved to be a better-than-average backdrop for the theater of arrival, far more stylish than the average step-and-repeat runway. (Some red carpets, as the Balenciaga designer Demna Gvasalia remarked, are not even red.)

The restaurant’s honeyed wood wall panels, its shimmering metal bead curtains and dramatic entry stairway, designed by the architect Philip Johnson, framed an assembly line of the shiny fashion elite as they gathered both to beat the drum for what has burgeoned into a global industry valued in the trillions and to celebrate a general readiness on all our parts to resume dressing up, as the CFDA chairman Tom Ford said, “above the waist.”

Fashion, to hear Daniel Day tell it, is “about messaging.”

“It’s not about the clothes. It’s about telling a story that makes someone look at something in a different way,” Mr. Day, better known as Dapper Dan, said during cocktails before being presented with the Geoffrey Beene Lifetime Achievement Award. And what a life it has been.

An innovator from Harlem whose early designs repurposed — “sampled” seems an apt word in this context — the logo-centric codes of European luxury labels for consumers that historically had scant access to the real thing, he was once pursued by legal gunslingers for big luxury brands brandishing cease-and-desist orders.

All but hounded out of the business, he suddenly found himself a cynosure when Alessandro Michele of Gucci cannily concluded that, rather than sue him as a bootlegger, Mr. Michele ought to see him as a collaborator.

Now he has a silver statuette signifying the embrace of an industry that not long ago shunned him. “My ninth-grade teacher taught me,” he said, “that the essence of genuine aesthetics is taking something familiar apart and putting it back together so people can see it different.”

By broad consensus, that reset is what fashion needed, and the CFDA awards reflected a newly rejiggered vision for its future. The inclusivity that, as the supermodel Iman, one of the evening’s presenters, recently told this reporter may initially have been viewed as a commercial bid to broaden consumer markets has taken root in measurable ways.

This was reflected in the range of presenters and in the choice of awardees, among them the Brother Vellies designer Aurora James, who received the Founders Award in honor of her 15 Percent Pledge, a nonprofit that seeks corporate commitment to supporting Black-owned businesses.

A woman, Emily Bode Aujla, won men’s wear designer of the year (and in accepting her award said that, for her, fashion was about “textile preservation and stories”). The singer Ciara presented Telfar Clemens of Telfar the award for accessories designer of the year. And when the Korean actress HoYeon Jung finally managed to wrestle open the envelope and read out the name of the American emerging designer of the year, there were whoops of joy for its surprise recipient, Edvin Thompson of Theophilio, an immigrant from Jamaica.

Barely a decade ago, activists struggled to make headway in an industry stubbornly resistant to change and stained by a history of exclusion. Yet this year, by a broad margin, those both presenting and taking home the laurels were people of color.

A young Black designer, Christopher John Rogers, may have been shocked into near-incoherence when he reached the podium to receive his award as women’s wear designer of the year. (“I really didn’t expect this,” he said — with perhaps an excess of modesty given that he is a past Vogue Fashion Fund winner and a reliable awards-night favorite.)

More important, his success in a field he entered after failing to find work as a waiter is seemingly as assured as the theatrical designs he produces for everyone from Lil Nas X to Michelle Obama and has sold to both Bergdorf Goodman and Target.

There was some intrigue, of course, in the mystery of the Bottega Veneta designer Daniel Lee’s abrupt departure from the label just hours before the event, where he was in contention for two awards. (He lost; it was not Mr. Lee’s day.)

There were shoo-ins to accompany the surprises, as well as a somber moment when the models Beverly Johnson and Carré Otis described their experiences of sexual abuse and assault in the industry before giving the award for positive social influence to the model Sara Ziff, founder of the Model Alliance, which works for the safety and well-being of those in this unregulated and often-troubled business.

Mr. Gvasalia startled no one by taking home the international women’s wear designer award; hardly anyone today exerts greater aesthetic influence on the business. Zendaya cannot be thought to have had much competition for Fashion Icon since, as a one-woman branding machine, the lovely young actress neatly embodies that overworked rubric.

It was the English model Cara Delevingne who scored one of the few genuine laughs of a long night when presenting Anya Taylor-Joy, the star of “The Queen’s Gambit,” with the newly created face of the year award.

Calling Ms. Taylor-Joy — who wore leopard print gloves and a veiled pillbox hat — to the stage, the irrepressible Ms. Delevingne described hers as “the face that launched a thousand … shipments of chess sets.”

Ms. Delevingne, from the perspective of at least one observer, ought to be made M.C. of all such future events. Fashion wingdings, for all their surface glamour, tend to be plagued by inoperable earnestness, the silent buzz kill.

In Ms. Delevingne, the CFDA has a cure at hand. Occupationally in possession of the obligatory beautiful visage, she makes great copy on social and other mediums (shout out: Emporio Armani!). Yet behind her lovely mug lurks Ms. Delevingne’s secret weapon. She has the soul of Henny Youngman.