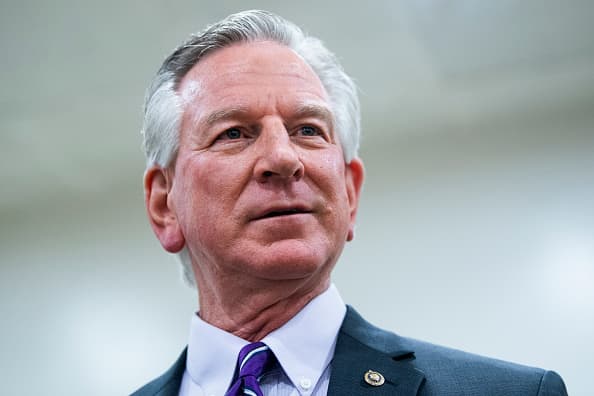 Sen. Tommy Tuberville, R-Ala., conducts a news conference in the senate subway to propose a vote on the January 6th commission today and delay the Endless Frontier Act and the Innovation and Competition Act until June, on Friday, May 28, 2021.

Sen. Tommy Tuberville of Alabama, who has been a staunch critic of China and companies there, yet again bought stock in Chinese e-commerce giant Alibaba last month, a new disclosure report reveals.

Tuberville’s three separate purchases of Alibaba shares valued at as much as $300,000 in total were made less than five months after the Republican’s spokeswoman told CNBC that in mid-2000 that he had ordered his financial advisors to sell off a small stake in Alibaba stock after becoming aware it was in his portfolio.

That previous sale of shares then valued at less than $5,000 occurred when the former Auburn University football coach was running for the Senate seat.

Tuberville was revealed in July as having violated a federal financial transparency law, the STOCK Act, by failing to file disclosures of about 130 stock and stock options trades from January 2021 through May 2021 within a 45-day deadline.

The sale of the put options — which would give their holders the right to sell Alibaba at a share price of $230 by Sept. 19 — was valued at $15,001 to $50,000. That sale occurred months after the divestment in Alibaba shares that his spokeswoman had described.

His spokeswoman at the time said Tuberville had not even known about the trades because they had been handled by his financial advisors.

On Wednesday, the spokeswoman again pointed to those advisors when asked about his recent Alibaba stock purchases.

“Senator Tuberville has long had financial advisors who actively manage his portfolio without his day-to-day involvement,” she said in an email.

When asked if Tuberville now plans to tell those advisors to not trade in the shares of Alibaba or other Chinese companies given his criticism of China, the spokeswoman said, “Of course.”

In his financial disclosure filed Wednesday, Tuberville said he had bought Alibaba Group Holding Limited American Depositary shares valued at between $50,001 and $100,000 on Dec. 14.

The next day, he bought Alibaba shares valued in the same value range, according to the disclosure, which allows lawmakers to report transactions in ranges, instead of in exact amounts.

Tuberville in June had praised President Joe Biden for issuing an executive order that would allow the United States to prohibit U.S. investments in Chinese companies that the White House said would undermine the security or democratic values of the U.S. and its allies.

In May, Tuberville introduced the Prohibiting TSP Investment in China Act, which would permanently ban federal Thrift Savings Plans for retirement from being invested in a Chinese company.