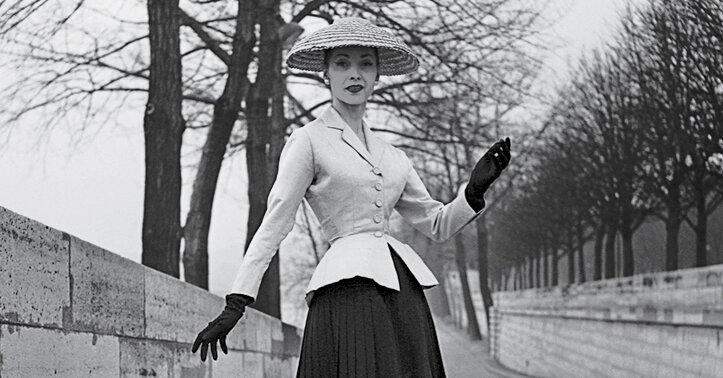 In December 1946, in the midst of a postwar Parisian society that was still rationing, Christian Dior opened his atelier in a four-story hôtel particulier at 30 Avenue Montaigne. A few months later, on a cold February morning, the designer presented his first haute couture collection in the townhouse’s Trianon gray Louis XVI-style salons to an audience of buyers and fashion editors. “In 1947, after so many years of wandering,” Dior writes in his 1956 autobiography, “couture was weary of only catering [to] painters and poets, and wanted to revert to its true function, of clothing women and enhancing their beauty.” The clothes he designed, as he puts it, were “for flowerlike women, with rounded shoulders, full feminine busts and hand-span waists.” Among the silhouettes in his debut Corolle line (named after the botanical term for flower petals), one in particular stood out: the Bar Jacket. Constructed in cream silk shantung, the veste was sculpted to fit snugly above a narrow waist, then flare into a scalloped basque, which was meticulously padded, stiffened and weighted to accentuate the hipline. Paired with a very full skirt, it was dubbed the New Look by the press — and set off a sartorial revolution.

The now-iconic Bar Jacket has since been reinterpreted by all of Dior’s creative directors, most recently Maria Grazia Chiuri, who in 2016 became the first woman to lead the house. Since then, she’s softened the jacket’s original silhouette by reworking the interfacing, and has reimagined it in prints ranging from camouflage to leopard jacquard. In 2019, she even commissioned the American artist Mickalene Thomas and the British designer Grace Wales Bonner to re-envision the jacket, with iterations woven in a patchwork of embroidered textiles and in black wool with macramé, respectively. Last year, a scouting trip to see Aristeidis Tzonevrakis, a Greek tailor based in Argos who specializes in centuries-old needlework techniques, inspired the brand’s latest homage to the garment. Tzonevrakis’s version, which (even if not strictly a Bar) nods to the original, is a white double-faced wool jacket embellished with terzidiko, a traditional Greek twisted-cord embroidery consisting of ribbons and braids. For its sleeves and pockets, he looked to the intricate stitchings of ceremonial fustanella costumes; the buttonholes are inspired by vests worn in the Greek islands. “Ever since my very first collection,” says Chiuri, “I have viewed the Bar Jacket with the utmost respect, while also considering it something that could be continually updated.” Monsieur Dior himself would, no doubt, approve.