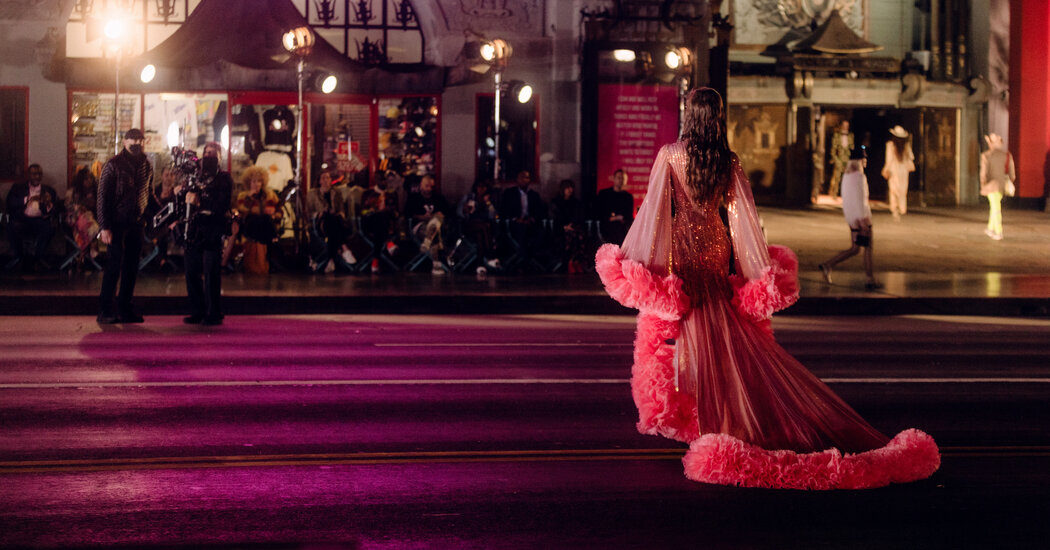 LOS ANGELES — On election night in much of America, in the shadow of Grauman’s Chinese Theater and amid the panting anticipation for Ridley Scott’s “House of Gucci” film, the actual Gucci designer Alessandro Michele brought the “Gucci Love Parade,” his first in-person show since February 2020, to Hollywood Boulevard.

Style and stardom collided in a conflagration of marabou, lace and lamé bathed in pink and purple marquee lights. It was hard to escape the feeling that the whole thing was a movie and everyone there just a character in it. That, after 18 months of living through screens, the boundaries between fashion and celluloid fantasy had finally collapsed, split down the seams.

A full city block had been cordoned off, each side of the Walk of Stars lined with hundreds of director’s chairs in signature Gucci canvas. Gwyneth Paltrow, in a new version of the red velvet Gucci suit she wore to the VMAs in 1996, schmoozed with Dakota Johnson (in bristling black paillettes), who happens to be dating her ex-husband. Nearby sat Salma Hayek Pinault, in a silver and blue sequined shirtdress, who stars in “House of Gucci” and is married to François-Henri Pinault, the chief executive of Kering, which owns real Gucci.

Jared Leto, who is a Michele muse, and also in “House of Gucci,” walked the runway in white denim, aviators and a double-breasted blazer. So did Miranda July, in a faux fur-trimmed strawberry cardigan, big Gucci logo briefs and stockings. On the sidelines, Billie Eilish (in a crystal skullcap) and Miley Cyrus (in sapphire fringe and butter yellow feathers) applauded.

“It’s a dream come true,” Mr. Michele said in a news conference after the show, of why he had decided to eschew Milan for Los Angeles. “There was no better place to restart.”

It was back in May 2020, after all, when much of the world was self-isolating and the fashion world itself was in crisis, that Mr. Michele had first declared a rethink of the industry system, stepping off the four-city collections track and abandoning old categories of fall and spring. Since then, and perhaps more than any other designer, he has resolutely hewed to a separate path: creating “Guccifest,” a mini film festival complete with a Gus Van Sant-directed Gucci mini-series; “hacking” into Balenciaga in April (and letting Balenciaga’s designer, Demna Gvasalia, hack him right back).

Coming to Hollywood, which Mr. Michele called “the American Olympus,” to come back to the runway was a logical next step.

Not just because of the stories his mother used to tell him about Hollywood that inspired him to want to create clothes. Or because, as Mr. Michele said, Gucci has deep roots in the jet set and the larger-than-life, or because the brand has been sponsoring the annual LACMA gala for many years.

But because increasingly the traditional gravitational and social rules of what to wear when and where no longer apply, and a lot of that is thanks to Mr. Michele’s work at Gucci. He routinely ignores old ideas about day and night or fancy and sporty or men and women, hopscotches through historical reference, and ultimately builds his characters in a way that used to be available only in the movies — or acknowledged only in the movies.

His clothes are unabashedly costume — they revel in the joy of playing dress-up, rather than pushing a silhouette forward or exploring construction. He designs at a pitch of maximalist emotion rather than modernism. (To say his collections look like the ultimate vintage store is a legitimate complaint.)

So this time ’round there were Marilyn Monroe silver and gold goddess pleats and Rita Hayworth-worthy lacy nightgowns; souvenir palm tree-print shirts and just-off-the-bus cotton lawn and cowboy hats; Elizabeth Taylor Cleopatra gowns and Joan Crawford shoulders. There were the variables of the back lot and the era of Edith Head and Adrian, when costume designers were also celebrity designers because they understood that life, as much as the world, is a stage, and everyone is dressing for their entrance, darling.

That’s why Mr. Michele put his show in the middle of Hollywood Boulevard: to underscore the fact that the sheer act of getting ready to go out and get some milk is a performance of self. Especially now that any moment could end up online and everybody is the director of their own social media series.

And maybe then you want to throw on a big fake fur chubby over your corset. Sport a three-piece suit in mint green or shell-pink satin with big fake orchids on the lapel. Wear knit bike shorts under a yachting blazer with cowboy boots. Whatever! Add a sparkling cat mask. Or maybe a feather boa. It’s ridiculous (it is). It’s a blast (it is).

Then strut out down the center of a city street as spotlights strafe the sky. And let everyone watching wonder what scene, exactly, this is.