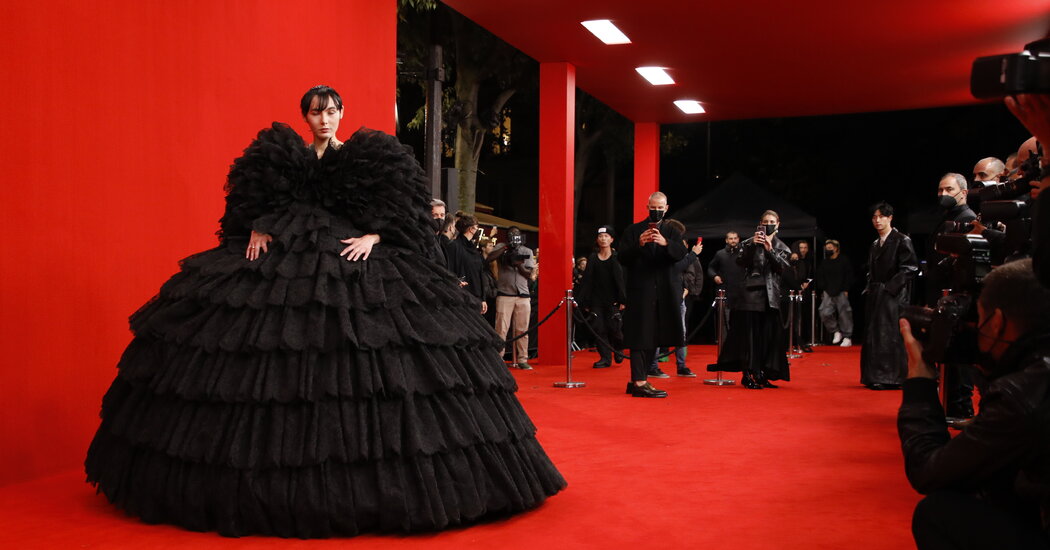 PARIS — The marquee outside the Théâtre du Châtelet, the gilded 19th-century musical theater on the Right Bank, cast a red glow over the fans thronged rows deep in the square outside on Saturday night. A forest of smartphones was held aloft, waving in the night air like a host of alien palm fronds, as various black cars pulled up to disgorge their guests. Penned-in photographers hovered behind a velvet rope while men and women swaggered their way across the red carpet, posing, waving, preening and otherwise camping it up on their way inside.

There was Offset, a voluminous leather jacket slipping off his shoulders, baggy black pants and plaid shirt/skirt wrapped around his waist! Here was Naomi Campbell, in a sharp-shouldered pantsuit!

It could have been any blockbuster film premiere (the new James Bond, say, or “The French Dispatch”) except that once inside, attendees took their seats to discover an enormous screen on the ornate proscenium on which was projected a live feed of — the red carpet entrances.

People giggled as Anna Wintour, wearing a blue floral dress, was caught on camera. They cheered when Lewis Hamilton appeared, all in black. And they started to whistle as a woman in a hoop-skirted black cupcake of a ball gown materialized — until the words “Look 01” appeared in a corner of the screen.

Thus did the Balenciaga spring show begin: as a knife-sharp belly laugh of an experiment on the metaphysics of the old red carpet and the new one of our digital lives, where posing has become the norm, voyeurism is a constant, the screen is the filter, and it’s harder and harder to tell what is real and what is created for the endorphin hit of clicks. What is private? What is public? What is entertainment? Who is a celebrity? (So many questions!)

All that phenomenology, with a dose of fashion on the side.

Some guests were obscure industry types: editors, retailers, friends of the house. Other guests were celebrities (Cardi B) or celebrity models (Natalia Vodianova). Some models were unknown: the street-cast friends and employees of all ages and forms of angular, uncompromising beauty that Demna Gvasalia, Balenciaga’s creative director, favors. Other models were famous: Isabelle Huppert, Elliot Page. Juergen Teller, the photographer, posed on the red carpet taking a photo of the photographers.

The clothes didn’t give it away, because so many people were wearing Balenciaga from different seasons (as per usual at shows, where some editors have been known to change in cars between collections). And because part of Mr. Gvasalia’s achievement at the brand has been creating an immediately identifiable signature: one that adds couture silhouettes to puffers and sweats, frays the edges and upsizes the shoulders, treats entrance gowns with the carelessness of the everyday. So what was new and what was old was not immediately apparent.

After their entrances, the models sprinkled themselves among the other people sitting in the orchestra and balcony to watch the surprise premiere of “The Simpsons/Balenciaga,” a short made for the occasion in which Demna invites all of Springfield to Paris to take part in his show. Anna, Kim and Kanye had cameos (cartoon Anna said she loved it). Marge, Homer, Bart and Lisa walked the runway. Then the real live audience got up and streamed into the bar for a cocktail party, the models still wearing their collection finery so it could be viewed up close.

There was a starry starry night of a sequined cape, and a strapless gown with molded, 1950s hips. A floaty silver frock like a Baked Alaska made of astronaut blankets. Ripped, baggy upcycled denim and long, slouchy knits. A lot of black, with shots of silver and two fan-pleated dresses, one in bright blue and one in two-tone pink and red. Some gleaming catsuits and some Lurch suits. Leather (plant-based, according to the news release) and layers. A new version of the Croc — Hard Crocs! — shored up with metal.

Mr. Gvasalia has been steadily raising the bar when it comes to shows, especially during the pandemic: eschewing a straight livestream for a VR experience, and then a video game. Digitally, the only one who could match him this season was Kunihiko Morinaga of Anrealge, who teamed up with the filmmaker Mamoru Hosoda to create a psychedelic short that combined anime with prismatic dresses in a mesmerizing dialogue between imagination and actuality.

But with the red carpet affair, Mr. Gvasalia turned the whole existential question about the return of in-person events (good or bad?) into a treatise on the exercise itself, blowing it wide open and rendering it moot. And he made everyone in attendance complicit in his critique, or made it impossible for them not to roll their eyes in winking acknowledgment of their own, already existing, complicity.

The destruction of the fourth wall — the one between show and viewer, which solidified during the pandemic — has become a sub-theme of the season; it’s the single most striking example of how the system can change (and actually advance).

Francesco Risso did it with his Marni happening in Milan, Mr. Gvasalia did it at Balenciaga and at Valentino, Pierpaolo Piccioli did it too, trading his prepandemic show space in the ornate Hôtel Salomon de Rothschild for the grimy cobblestones of the Carreau du Temple, an old covered market.

Under the industrial girders Mr. Piccioli built a sort of town square, with flower sellers and cafe tables, taking over nearby brasseries and shops in the process. Then he sent his models, most of them street-cast, stalking not just through but out en plein-air, so passers-by could stop and watch as well: the grand capes atop shorts and camp shirts in chocolate, amethyst and leaf-green taffeta with all the stiffness washed out; the baroque floral pajama sets; the lacy white shirts with faded baggy jeans; the sparkling showgirl sequins of the finale.

It’s the sort of gentle statement-making originated long ago by Yohji Yamamoto, whose ability to create clothes that seemingly bridge the time-space continuum in infinite variations of black is as alluring now as it was in his heyday (he’s due for rediscovery). See his trio of New Look trench coats, silver-splashed Grecian columns and desiccated hoop skirts — metal rings orbiting the body as both remnants of the past and portents of the future.

And it all made the Hermès show, held far outside the city at Le Bourget, one of the busiest private jet airports in Europe, seem entirely out of step.

Not the clothes so much, which focused on simple shapes elevated through the astutely chosen detail: the saddle stitching on the leather that finishes the edges of cotton overalls or an apron dress; the silver studs lining the tape on a suede coat and glinting like tiny pearls; the diamond links in a flapper shift freed at the bottom to flutter like butterfly wings in the breeze. But the setting, which demanded a fleet of private cars to access and hours in traffic.

Nadège Vanhee-Cybulski, the artistic director of Hermès women’s wear, said she was thinking about escapism and new beginnings; hence the rotating sunrise backdrop by the artist Flora Moscovici. But Ms. Vanhee-Cybulski’s strength as a designer is a quiet perfectionism best appreciated close up. A grandiloquent airport hangar is the opposite of what her work represents.

Maybe the only people who can afford Hermès are the private jet crowd. But at a time when the fashion landscape is flattening in all sorts of interesting ways, is that really the best takeaway?