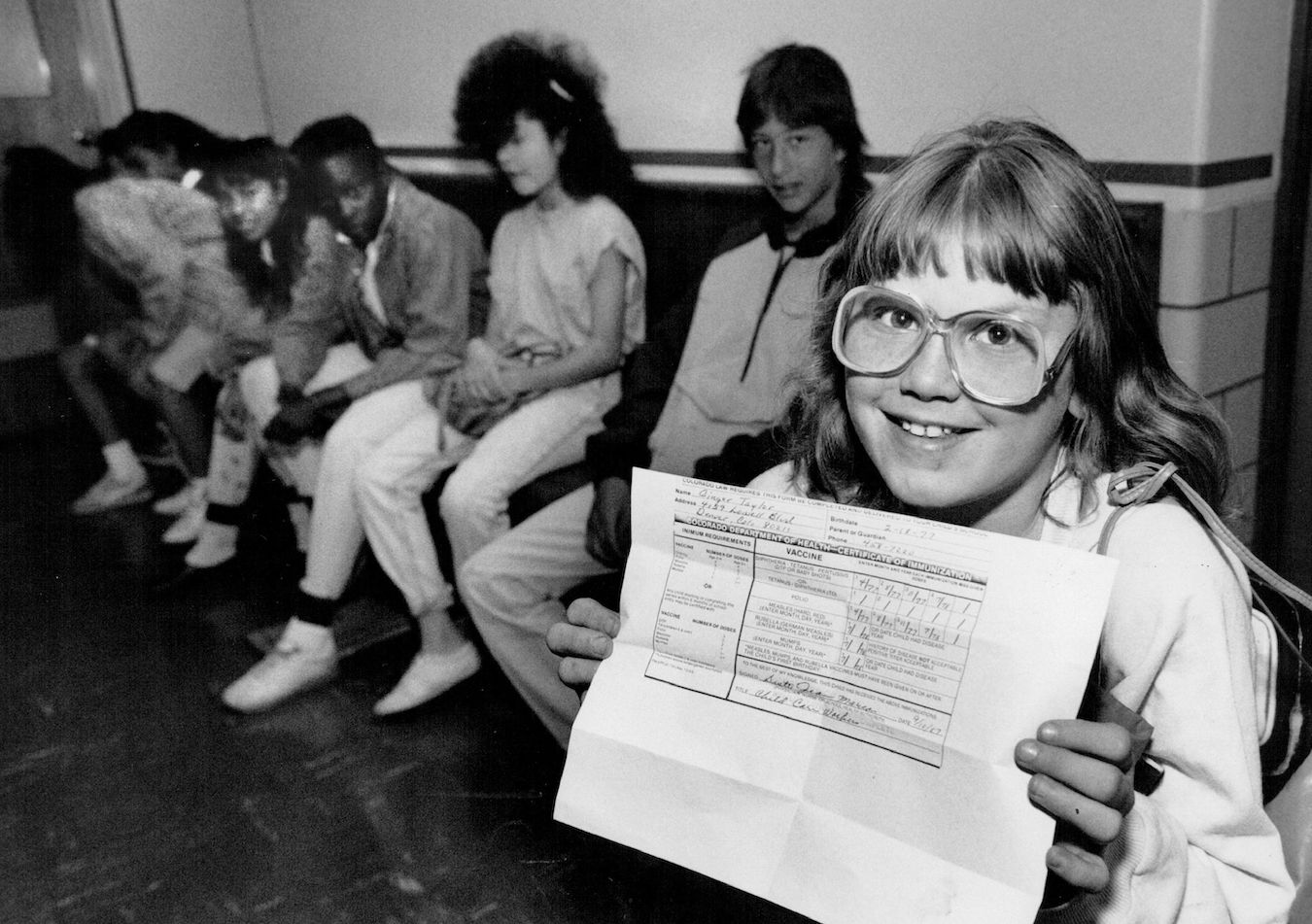 On March 31, 1977, as a measles epidemic swept through Los Angeles, the county health department issued an ultimatum to the parents of the county’s 1.6 million schoolchildren: Get your kids vaccinated within a month or keep them home.

The “no shots, no school” warning was a novel threat at the time. Since the 1920s — and smallpox — no major city in the United States had locked the unvaccinated out of school.

The threat — voiced most audibly by Dr. Shirley Fannin, whom the Los Angeles Times described as “the energetic, no-nonsense physician” in charge of communicable disease control — brought results. About 40,000 county schoolkids were excluded — sent home or forced to sit in the school auditorium all day. Within a week most had been vaccinated. The epidemic, which had killed two children, caused brain damage in five and left scores hospitalized with pneumonia, fizzled out.

By demonstrating that the public would acquiesce with rigorous enforcement of school vaccine mandates, the L.A. school system had a powerful influence on the country. President Jimmy Carter launched a national initiative to get measles and other recommended vaccines to all American children. Federal health officials twisted arms, shaming reluctant states, one by one, into tightening their vaccination rules. By 1981, 95% of U.S. schoolchildren had received the recommended vaccines. Over the next two decades, the U.S. nearly eliminated diseases like polio, rubella, measles and tetanus.

The Los Angeles Unified School District announced in September that it would exclude schoolkids 12 and older from campus on Jan. 10 unless they were vaccinated against covid-19. On Friday, however, the district decided to suspend the enforcement until next fall, according to school board member Jackie Goldberg. About 28,000 kids — roughly 14% — had yet to show proof of vaccination, she said. To provide those children with teachers for online learning would have deprived vaccinated kids at some schools of proper instruction, and “that wouldn’t have been fair.”

Goldberg, who grew up in the Inglewood section of Los Angeles, is troubled by vaccine hesitancy. She remembers the 1977 measles outbreak: “We were terrified. Kids were dying,” she said. At the time, many Angelenos had no health care, and the county’s free vaccination clinics were seen more as a gift than as what some consider them today — an imposition.

Before then, vaccination rates were low in Los Angeles for two reasons: Lower-income people couldn’t afford or get access to vaccines, and many people were indifferent to the risks of measles, considering the disease a normal part of childhood since most children suffered no permanent effects. Some people were opposed to vaccines in general, but “they were thought to be kooks, and there were so few of them,” said Dr. Peter Krause, a Yale University epidemiologist who worked on an outbreak of measles at the UCLA campus in 1977. Well into the 1990s, only about 0.5% of children in California were exempted from the vaccine requirements because their parents opposed or mistrusted vaccination.

What was different then? No social media, of course. And partisan politics played no role in vaccination rates. Dr. James Cherry, 91, who has taught in UCLA’s pediatric infectious diseases department since 1973, can’t recall meeting any anti-vaccine Republicans during the 1977 pandemic. He finds it remarkable to hear Govs. Greg Abbott of Texas and Ron DeSantis of Florida fighting mandates aimed at stopping a virus that has killed more than 790,000 Americans.

“The thing just blows the mind,” he told me. “Measles was bad, bad for a lot of reasons, but covid is a hell of a lot worse. And we could prevent virtually all deaths by vaccination.”

Today, the clever use of social media by anti-vaccine activists has revealed the vulnerability of the vaccination effort. Public health departments are understaffed and overwhelmed by work and attacks of vitriol and violence. And fighting endemic infectious diseases has never been easy.

But now, the politics seem even messier than the disease, let alone the vaccines. Battles over covid vaccination mandates could ripple outward to threaten vaccine mandates long in place for diseases that are still deadly at worst, and costly nuisances at best.

Refusing mask and vaccine mandates has become integral to many Americans’ identity, creating a base to which GOP politicians have responded.

Sen. Richard Pan (D-Sacramento), who fought for state laws to close loopholes that people opposed to vaccines used to avoid vaccinations against childhood diseases, is still hopeful reality will win out. But the process may look less like public consensus than an angry majority turning on anti-science rebels.

“People are going to get frustrated, tired of the persistence of these diseases, and there will be more general public pressure for mandates,” he said. “The question is, ‘How many people will die in the process?’”