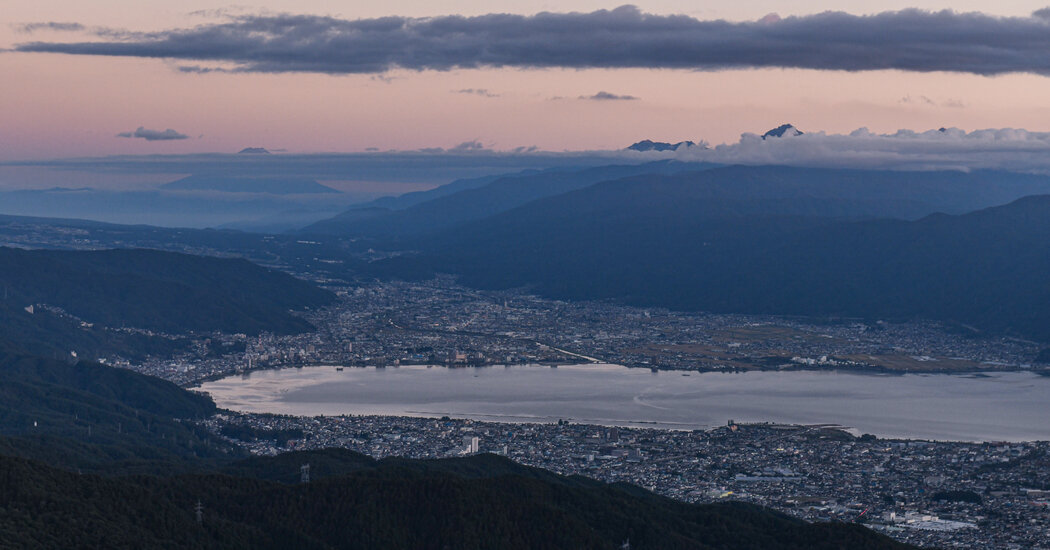 SHIOJIRI, JAPAN — The surroundings look a great deal like the Vallée de Joux in Switzerland, the cradle of haute horlogerie and home to some of the world’s most celebrated watch brands.

But Shiojiri, a city surrounded by the Jonen and Hotaka mountain ranges of Nagano prefecture, has a renowned watch operation of its own: the Micro Artist Studio, where an elite team of Seiko’s craftsmen and women make the Masterpiece Collection, watches that the brand calls the fusion of horological technology with refined craftsmanship.

The setting has even helped shape the timepieces’s designs, like the Grand Seiko Spring Drive 8-Day Power Reserve, released in 2016.

“The nature in Nagano prefecture was the main inspiration for the design of this model,” said Kazunori Hoshino, who is in charge of several studio movement designs and other projects — although not a member of the studio team itself.

“The light dial version is diamond dust, like the early winter mornings in Nagano, when you can see the reflection of the snow,” he said. “The dark dial is inspired by the night sky dotted with stars. I think it’s a very Japanese way to express something, through nature.”

Visible on the back of the watch, the movement includes a bridge in the shape of Mount Fuji — “the highest mountain in Japan and we can see it from here when the sky is clear,” Mr. Hoshino said. And its curved power reserve indicator represents the shore of nearby Lake Suwa, with the rubies and blue tempered screws meant to represent the area’s lights, twinkling on the lake’s surface at night.

To make Mr. Hoshino’s creations come to life, the studio artisans usually work from a blueprint he provides, but not for Spring Drive 8-Day model. “This time I didn’t draw much,” he said. The artisans made the parts on site and adjusted them, using Mr. Hoshino’s specifications, as they went along.

The entire creative process, from Mr. Hoshino’s original idea to the watch’s release, can take as long as seven or eight years. “All parts are made within the studio, and I work very closely with every craftsman for each part of the process,” he said.

The Micro Artist studio — named for the micro, or fine, work done by the team — was established in 2000 with the purpose of “uncovering, examining and mastering the technologies and skills passed on by our predecessors for the production of luxury watches so that world-class Japanese timepieces could be created,” according to Seiko’s official description.

Ten artisans, two women and eight men, make up the team that designs every movement and case, in concert with Mr. Hoshino; polishes each key component; decorates dials, perhaps using an ultrafine brush from Hiroshima prefecture; and assembles each watch by hand.

The studio is in a five-floor white structure built in 1961, the Seiko Epson Corporation building. It also houses the Shinshu Watch Studio, where Spring Drive and quartz watches for Grand Seiko are made. (Mechanical watches for that brand are made in Shizukuishi, in Iwate prefecture in northern Japan.)

At first sight, the interior looks like almost any corporate space, a maze of long halls lined with nondescript office doors. But one door bears a simple black-and-white plate that says “Micro Artist Studio” in English and Japanese, along with a small “Employees Only” warning.

The studio itself has three areas: a central section outfitted with wooden tables and bookshelves packed with horology books and magazines as well as small refrigerator units for parts storage, to keep humidity at bay. A small Shinto altar, or Kamidana, sat atop a bookshelf. Dedicated to the first deity in Japan to inform the people of the time, it was placed there as a mark of respect for Japanese tradition and the culture of valuing time, the studio workers said.

Two smaller ateliers (one for polishing and finishing, the other for movement assembly) were on either side of the central area.

On a day in October, the artisans seemed especially happy to welcome visitors — pandemic restrictions had limited entry to staff members for several months. They all wore masks and knee-length white coats with the studio logo on the upper back and, just below, the words Micro Artist embroidered in navy in a cursive font.

The watches they have created include the first complication watch released by the studio, the 2006 Credor Spring Drive Sonnerie, which had more than 600 parts and incorporated a Orin bell used in Buddhist rituals; the 2011 Credor Minute Repeater, its two gongs, forged by Japanese steel makers, sound like a traditional Japanese charcoal wind chime; and the 2014 Credor Eichi II, known for its simplicity, with indexes and letters hand-painted in lapis lazuli on a porcelain dial.

All the studio’s creations feature Spring Drive, a technology introduced in 1999 that combines the high torque created by the unwinding of the mainspring with electronic watchmaking technology, to produce what Seiko says is the utmost accuracy in timekeeping. It also allows the seconds hand to glide smoothly around the dial without making a ticking sound.

For added effect, the hands of all Spring Drive timepieces almost touch the edge of the dials, “to highlight the smoothness,” said Masatoshi Moteki, one of the studio’s movement designers, who was involved in the creation of the Spring Drive technology before he joined the studio in 2003. Then, around 2013, Mr. Moteki and his fellow craftspeople started to develop what would become the 8-Day Reserve of the Spring Drive technology, to make a watch run without winding it for eight days, or 192 hours.

Mr. Moteki said that right after joining the studio, he found the work quite challenging. “I studied by myself and learned from books, but there were some things I didn’t quite understand,” he said. “But in 2007, after I visited Philippe Dufour in his atelier, I was able to clearly understand.”

Mr. Dufour, one of the most respected independent watchmakers in the industry, had also shared some of his savoir-faire with the artisans when he visited in 2006, including his practice of polishing watch cases with gentian wood to achieve a particularly silky finish. His presence is still felt in the studio: a small wood-framed portrait of Mr. Dufour sits on top of the desk of Yoshifumi Kobayashi, a craftsman in charge of polishing.

(In the early days of the studio, Mr. Dufour said during an interview in 2019, he used to gather gentian wood from the forest behind his atelier in Le Solliat, Switzerland, and send it to the studio. Now the artisans obtain it from Hokkaido, an island in northern Japan, where it is grown for medicinal purposes).

Mr. Kobayashi showed how a hairline finish is achieved: He used a strip of black sandpaper to rub the movement slowly, turning it from a mirror-like surface to a lined one, and then coating it with rhodium. The coating, which prevents rust and makes the surface more scratch resistant, also gives the lined area a white hue that accentuates the contrast with the mirror finish.

Across the room sat Katsumi Nakata, the team’s lead horologist, who has spent most of his career developing and assembling high-end watches. He joined Seiko in 1982, and the studio in 2004.

Mr. Nakata has been honored twice by the Japanese government: in 2010, with the title of Contemporary Master Craftsman, for outstanding skill; and in 2018, with the Medal with Yellow Ribbon. During the visit, he demonstrated how hard it is to assemble the large one-piece bridge of the Caliber 9R01 movement (one of two calibers — the other is the 9R02 — created by the studio). In a few seconds he had performed the difficult task.

Nearby, Yukie Seki, who is in charge of assembling two Grand Seiko calibers, used a penlike tool to oil a movement.

How does someone become a Micro Artist Studio artisan? Not by seniority. “We have a variety of skilled people in the studio, but we have to think about how to raise the next generation,” Mr. Moteki said. “As you may have seen during the visit, there was one very young watchmaker who was about to start training to be a part of the studio,” he said — referring to a 29-year-old man who joined the studio in March and is being trained to assemble the Credor Sonnerie.