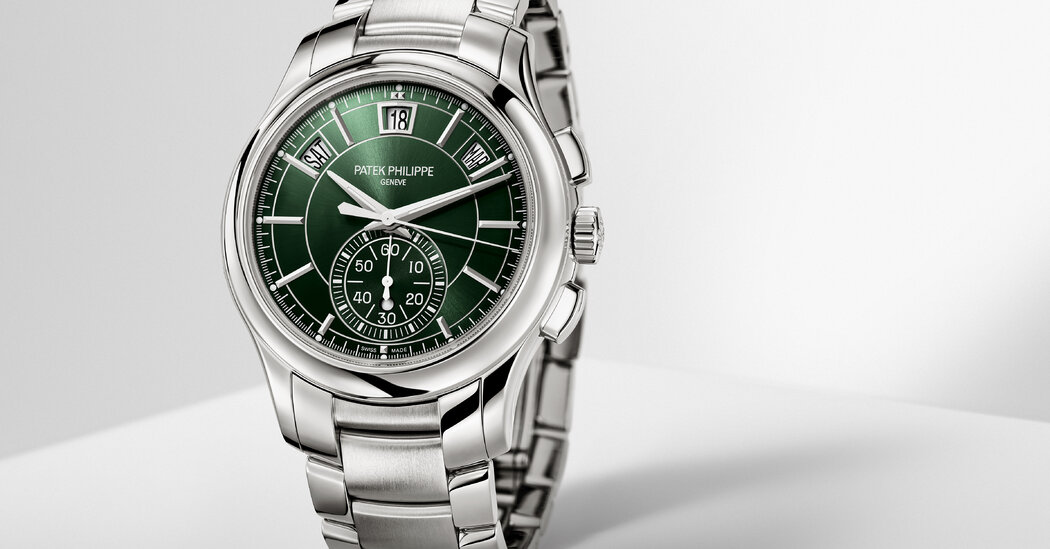 Green has been a popular color in luxury watches before, but during the pandemic, its appeal has really grown. From Audemars Piguet’s platinum Royal Oak with a shiny emerald-color dial to Zenith’s muted forest Chronomaster Revival Safari, it seems the entire industry has gone green.

And sales of green timepieces have increased, too. “We’re selling millions of pounds worth of watches with green dials,” said Mark Toulson, head of watch buying at the Watches of Switzerland Group, which has stores in Britain and the United States. “Since our year start in May, we’ve sold 80 percent more green watches than in 2020, and 197 percent more than in 2019.” He added that the figures would be higher, but that demand has been outstripping supply.

At Harrods, the picture was similar. Beth Hannaway, the London department store’s head of watches and jewelry, said sales of green watches have been increasing every year since 2018 and now account for almost 15 percent of her division’s sales. “For the customer that already has watches with black, white and blue dials, but wants to keep adding to their collection,” she said, “green is more unexpected but still quite safe” as a stylish choice.

One of the biggest watch stories of the year even involved a watch with a green dial.

In April, Patek Philippe introduced a steel version of its highly sought-after Ref. 5711 Nautilus with an olive green dial, priced at $34,893. And by July, a pre-owned model sold at auction for $490,000. Last month, the family-owned Geneva company announced two more green-dial watches. “Green has always been a color that underlines a sportive touch for Patek Philippe models,” Thierry Stern, the company’s chief executive, wrote in an email.

Traditionally, timepieces had black or white dials, but in recent decades, the watch landscape has become awash with color. Blue has emerged as the principal alternative, with reds, browns, oranges and a rainbow of other colors also entering the picture. Green, though, is clearly the most popular hue in the new spectrum.

Last year, for example, Rolex introduced a collection of Oyster Perpetual models with dials in pink, coral red, yellow, turquoise — and green. All now have long waiting lists. “Color is the trend and green is leading it,” Mr. Toulson said. “I think it will be here for a long time.”

For some brands, though, the shift to color has been a bit more traditional. “Ten years ago, 90 percent of our assortment had black dials and 10 percent had white,” said Alessandro Ficarelli, Panerai’s product director. “Today, around 50 percent is black, 30 percent blue and 20 percent white.” But he did say that green dials were used chiefly for special editions and accounted for less than 1 percent of the brand’s sales.

Color experts say the widespread use of green in watch design is no surprise. “We began to see this growing embrace of the greens in the 2010s,” said Laurie Pressman, vice president of the Pantone Color Institute in New Jersey, which has more than 500 greens in its Color Systems.

The institute even declared Greenery, a yellowish green hue, as its color of the year in 2017. “We’d started to become more glued to our computers and we were losing that whole work-life balance,” Ms. Pressman said. “Here was a color that satisfied a growing desire to rejuvenate and revitalize. It symbolized the reconnection we were seeking with nature. It doesn’t surprise me we’re seeing this playing out in watches.” (Ms. Pressman also said that, while the human eye can discern 8 million to 10 million colors, it can discern more shades of green than of any other color.)

Piaget’s design studio director, Stéphanie Sivrière, said the pandemic has led nature to play an even greater role in the creation of the company’s watches — for example, the Altiplano Ultimate Concept Edition “La Côte-aux-Fées,” introduced this year. It is a green version of Piaget’s record-setting ultrathin watch and named for the forested area in Neuchâtel, Switzerland, where the brand was founded in 1874.

“I’ve been more inspired by nature over the last two years,” Ms. Sivrière said. “I feel it’s a retour au source prompted by Covid. Green is also a lucky color, particularly in the Middle East and Asia, which are very important markets for the luxury watch industry.”

Jill Morton, a color psychologist based in Hawaii and chief executive of the color consultancy Colorcom, said it was hard to reduce its new popularity to one factor as there are so many shades of the color. “Green was considered once quite nerdy, but there aren’t any bad colors any more,” she said. “A dark green is dignified and restful, a bright grass green is energizing and a light green is soothing. A jade green could be more seductive.

“Green is the color of our currency” in the United States, she said, and “it’s also the color of Islam. It’s really hard to pinpoint what green means, and it’s constantly changing.”

But Ms. Morton conceded that there could be a universal explanation: “We’re all exhausted from the past few years, and bringing little nuances of color into these small wearables and electronic devices gives us energy.”

Then there is the meaning that probably first popped into your head when you read the word “green” in the headline: Green can be symbolic of sustainability, of environmental consciousness.

“We’re seeing a lot more conscious consumerism and customers buying fewer items, but higher quality,” Ms. Hannaway of Harrods said. “All of that subliminally plays into the idea of a green watch. Some brands are even coloring their most sustainable watches green, making a literal attachment to the cause.”

Panerai is one such brand. Its Luminor Marina eSteel Verde Smeraldo (which means emerald in Italian) has a recycled steel case, a recycled steel dial with a green finish and a green strap made of recycled PET plastic. “In three years time, at least 30 percent of the collection” will have such recycled elements, Mr. Ficarelli said.

The color trend also could have something to do with the industry’s growing focus on women. “Our female client leans more toward a vivid emerald green, whereas male customers tend to lean toward earthy forest tones,” Ms. Hannaway of Harrods said. She also noted that, of the green, blue and burgundy versions of the 2021 Cartier Tank Must, “green is the one we have had by far the most interest in.”

Despite the green rush, Mr. Toulson of the Watches of Switzerland Group played down its significance: “There’s an element of fashion here, and like any trend, once a few people do it, others get on it, too. But let’s not forget Rolex has been doing green dials forever.”

Yet no one is expecting green to fade, even allowing for changing consumer appetites. “We’re working two, three years in advance and thinking about the new green,” Ms. Sivrière of Piaget said. “But green will still be here, because it’s always the color of hope.”