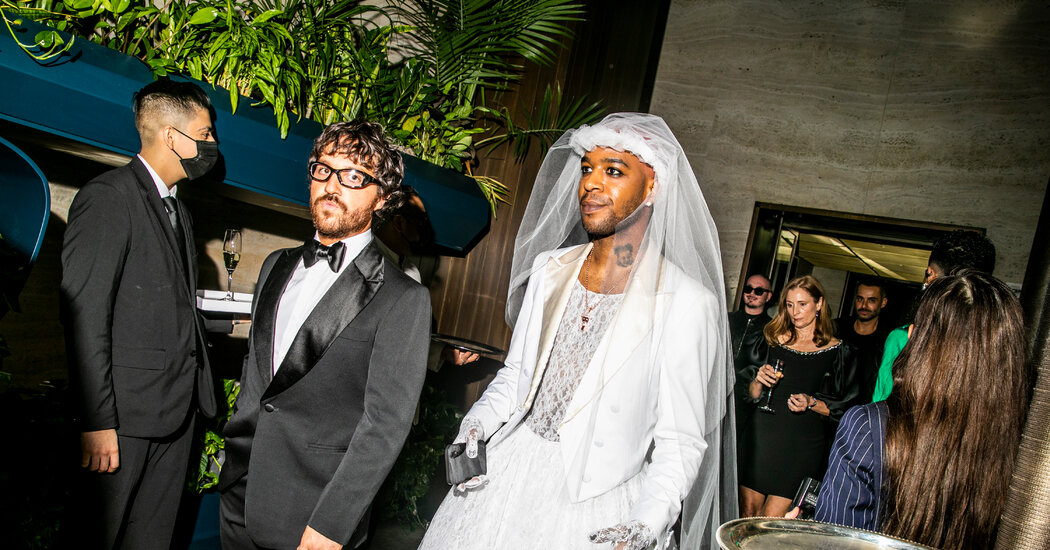 When Kid Cudi attended the CFDA Fashion Awards last year, he wore a lace wedding gown with a matching veil and a five o’clock shadow. When Lil Nas X went to the MTV Video Music Awards in 2019, he paired a silver suit with a ruffled lace shirt. And earlier this year, when Jared Leto promoted his Marvel film “Morbius” at a Los Angeles premiere, he wore a flowing cape made of white lace.

The trend is not limited to red carpets. In recent years, lace has appeared on the men’s wear runways for Burberry, Moschino, Saint Laurent, Versace and other labels. Even mainstream stores including Walmart and Amazon now sell lace shirts and accessories for men.

Once consigned to bridal wear and women’s lingerie, lace is being embraced by a new generation, particularly younger men, who are drawn to the fabric’s history and craftsmanship, and by more relaxed attitudes about gender-fluid clothing.

“Maybe lace is the final frontier” in men’s wear fabrics, said Michele Majer, a textile historian, who with Emma Cormack and Ilona Kos, organized “Threads of Power,” an exhibition about lace that opened in September at the Bard Graduate Center in Manhattan.

The show, the first major one about lace in New York City in almost 40 years, charts five centuries of the gauzy material as it morphed from an aristocratic accessory flaunted by both sexes to an everyday consumable worn almost exclusively by women.

Illustrated with pieces from the Textilmuseum in St. Gallen, Switzerland, “Threads of Power” documents how lace originated in 16th-century Europe in two primary styles: bobbin lace, which is made by twisting flax or silk threads around pins to create elaborate motifs; and needle lace, in which the airy, patterned fabric is built up with tiny stitches.

Both methods are excruciatingly slow, labor-intensive and expensive. Kingdoms passed sumptuary laws to keep lace off the riffraff. (They wore it anyway.) And while some highborn women picked up lacemaking as a hobby, it was mostly made by women or girls working for scraps in cottages or convents, beyond the protection of artisanal guilds.

With the French Revolution came a repudiation of frippery. Men’s wear became fitted and monochromatic, and remains that way more than 200 years later, while lace returned to women’s fashion and became more democratic with the improvement of machine-made textiles.

Lace by its very nature is paradoxical. It covers and reveals at the same time, managing to be both chaste (like wedding veils) and provocative (like underwear). This peekaboo quality amps up the eroticism, and yet lace is also the stuff of grandmotherly hankies and doilies.

This is why lace became “kind of taboo for men,” Ms. Majer said. So what accounts for its newfound unisex popularity?

Claire Wilcox, the senior curator of fashion at the Victoria and Albert Museum in London, sees lace as the latest effort by some men to reclaim their inner peacocks. In mid-18th century Britain, wealthy dandies known as Macaronis returned from Grand Tour sojourns in Italy wearing flamboyant outfits that were the sartorial equivalent of the silky, flowing pasta they dug into. In the late 19th-century, Oscar Wilde personified an aesthetic rebellion against the stovepipe rigidity of Victorian men’s wear. In the 1970s, glam rockers wore colorful, flouncy clothing to defy postwar propriety.

Lace also fits into a broader shift toward gender-fluid fashion, with younger consumers blurring the lines between what was traditionally considered male and female. “Everything is softer, more fluid, more decorative,” Ms. Wilcox said.

In “Fashioning Masculinities: The Art of Menswear,” an exhibition at the V&A, which Ms. Wilcox organized with Rosalind McKever and runs through Nov. 6, there is a pink satin men’s ensemble with a lace jabot, or neck frill, designed by Harris Reed, who was recently named the creative director at Nina Ricci. The garment evokes 18th-century British aristocracy by way of the New York Dolls.

“It’s a new form of dandyism and lace very delightfully has got a part to play in this,” Ms. Wilcox said.

Whereas past generations might have worn lace for shock value, young men today are simply indulging in free expression, said Mathew Gnagy, a textile maker and historian who heads the costume center at Colonial Williamsburg, the living-history museum in Virginia. Mr. Gnagy points to the ease with which Harry Styles turned up at the 2019 Met Gala in a sheer black blouse by Gucci that was frilled with lace.

“It’s not about masculine or feminine,” Mr. Gnagy said. “Anybody with any presenting gender can wear that outfit. That’s the essence of what unisex ought to be.”

Mr. Gnagy was less complimentary about the clothes he sees on runways that simply translate conventional men’s wear into machine lace. “When lace is handmade, it has unique properties that allow seams to be eliminated, making garments look like they organically grew into a particular shape,” he said. “I would love to see designers going a little bit further.”

One of those designers may be Kasuni Rathnasuriya, who has been working with lacemakers in her native Sri Lanka to produce women’s clothing for her label, Kúr, since 2012. At the urging of some clients, she offered men’s wear for the first time this year, including $250 cotton shirts with panels of handmade bobbin lace.

“I was surprised by the fact that people accepted it,” she said. “I didn’t receive a single negative comment about it.”

Other designers are drawn to the stories that lace can tell, whether it’s the pattern that has evolved across centuries and continents, or the history of its makers and owners.

For Emily Bode, 33, the designer behind the handcrafted men’s wear label Bode, lace evokes 1950s America, “when people had more frequent formal dining in their houses” and other social rituals, she said. “It is a material that has so much depth to it.” Since founding her label six years ago with an emphasis on upcycling, Ms. Bode said she has noticed more “sentimentality” around dressing that extends to emotional fabrics like lace. “I don’t think it’s completely mainstream yet, but I think people are really thoughtful about what they buy.”

Antique lace also speaks to Tristan Detwiler, 25, the Southern California founder of Stan, a surf-inspired label that also uses vintage fabrics. His first formative encounter with lace involved a table runner that belonged to a friend’s grandmother, and he’s been incorporating it into his men’s wear ever since.

An 18th-century lace tablecloth from England, for example, was crafted into a $5,000 shawl-collared blazer, with the original scalloped hem used as edging and the inverted cherubs falling in perfect symmetry at the shoulders. The fabric is a little yellow, but details like that, according to his website, “are reminders of its history.”

“Even the grungy skaters and surfers want style,” he said.

While most lace today is made by machine, the art of making lace by hand has not been entirely lost.

Six years ago, three lace artisans in New York City founded the Brooklyn Lace Guild to teach traditional lacemaking to a new generation. Elena Kanagy-Loux, 36, a textile artist and historian who has 400,000 followers on TikTok, traveled to Slovenia in the 2010s to learn the craft. Devon Thein, another founder, learned 50 years ago from a Danish sea captain’s wife in New Jersey.

Both women said the pandemic was a boon to lacemaking, not just because crafting was huge, but because lacemaking, it turned out, could be taught on Zoom. The guild holds demonstrations with bobbins, needles and shuttles at the Bard exhibition on weekends through December.

The guild’s motto, Ms. Kanagy-Loux noted, is, “Lace is for everyone.”