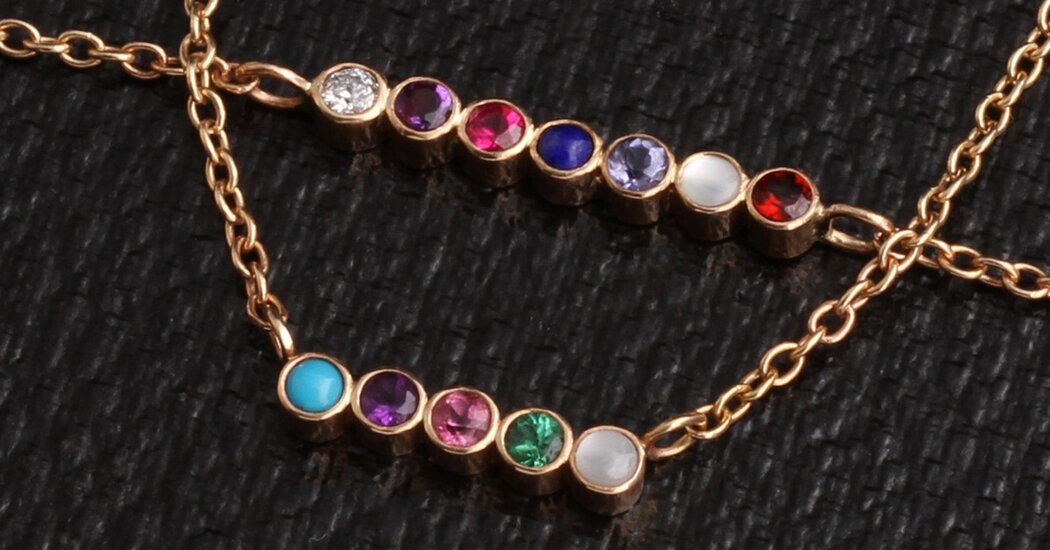 While strolling through Portobello Market in London more than eight years ago, Erica Weiner, who sells antique jewelry online, saw something weird. “There was a ring set with stones, but not symmetrically, and not in particularly complementary colors,” she said in a phone interview from her home in New York’s Hudson Valley.

It was an example of acrostic jewelry, a dealer told her, a design that features a kind of puzzle.

As Camille Cuvelier, who sells such antique pieces on her website Galerie Penelope, said: “Each piece has a message.”

During an interview in her apartment in Paris, Ms. Cuvelier picked up a ring to demonstrate. “The first letter of each stone spells something,” she said, indicating the line of small gems: ruby, emerald, garnet, amethyst, ruby and diamond — or “regard,” a popular sentiment from the past.

She also showed a Victorian bracelet set with malachite, amethyst, emerald, sunstone, turquoise and agate, spelling “maesta.” The word maestá means majesty in Italian, and often is used to refer to images of the Madonna and the child Jesus.

“Acrostic jewelry became popular in the 19th century, which was a sentimental century,” Ms. Cuvelier said, adding, “All the jewelry had a story behind it.” That spirit resonates today, she said, because: “people want to be different. That’s why vintage sells so well, you have something unique.”

Acrostic jewelry has been made for centuries by Mellerio dits Meller, the Paris jeweler that markets itself as the oldest family-run business in France, involving 15 generations now that Côme Mellerio, 27, has joined the maison.

“Our archives show we made an acrostic ring back in 1806,” said Diane-Sophie Lanselle, Mellerio’s development director, after welcoming a visitor into the boutique on Rue de la Paix.

The house also creates a variation in which “the first letter of each gemstone doesn’t spell out a word,” Ms. Lanselle said, “but instead sounds like a sentence when spoken.”

For example, a ring with lapis lazuli, amethyst, carnelian and diamond would spell “lacd.” When spoken, in French, it sounds like “elle a cédé” — or “she gave in, or she surrendered,” Ms. Lanselle said. “We still get requests for it.”

A block away, on the Place Vendôme, Chaumet put on display in spring 2021 an acrostic bracelet that it had made for Napoleon to give to Josephine. The jeweler also resumed making custom bracelets in the style.

Clients now are shown a variety of gemstones, with one stone for each letter of the alphabet, including xaga (obsidian) for the hard-to-find “x,” although in some instances there are two choices, like citrine or carnelian for “c.”

A customer’s selection of stones, a minimum of two and maximum of nine, are set in a pink gold bracelet from the jeweler’s Liens line.

Chaumet said it gets about one new request a week for acrostic jewelry, which also includes a ready-made example: a pink gold Liens bracelet with aquamarine, morganite, opal, uvite (tourmaline) and ruby, to spell “amour.”

Jean-Marc Mansvelt, Chaumet’s chief executive, said he rediscovered acrostic jewelry “when we did an exhibition in Beijing’s Forbidden City in 2017. We had the opportunity to have a trio of acrostic bracelets that Napoleon ordered for Marie-Louise, indicating the date of his birth, of Marie-Louise’s birth and their union. Napoleon was a romantic.”

Ms. Weiner, the online jeweler and antique jewelry dealer, said she and her business partner, Lindsay Salmon, were so taken with the acrostic style that they began making custom bracelets as well as rings and necklaces, with a minimum of one stone and a maximum of 12.

And requests, she said, have been as varied as the gem selections: “People ask for names of children; a series of initials; dates; names of people they lost, like a memorial; or a place, like Alabama, and we got some who wanted California.”