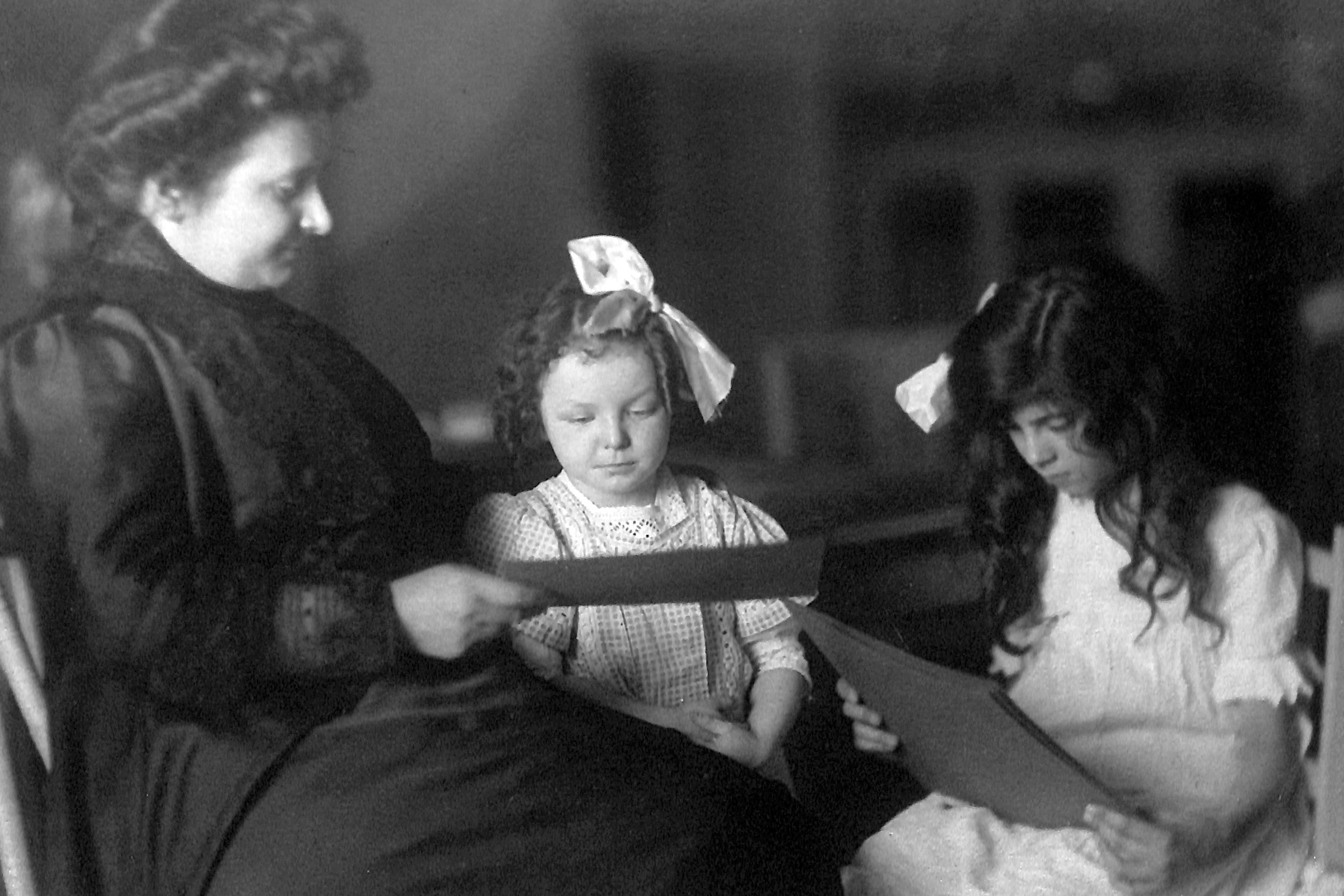 Most people think of Montessori education as classrooms that contain children of multiple ages, in which children are permitted to work uninterrupted, testing is deemphasized, and no grades are assigned. A smaller number know that the Montessori approach was developed over 100 years ago, that lessons are chosen based on observations of students, and that to a surprising degree, children choose what they want to learn. Fewer still know that the list of Montessori alumni includes the World War II diarist Anne Frank, noted chef Julia Child, Amazon founder Jeff Bezos, and Google founders Sergey Brin and Larry Page. What many fail to appreciate, however, is that Maria Montessori was a master liberator, whose philosophy has populated societies worldwide with free and responsible individuals.

Maria Montessori (1870-1952) knew from a young age what it was like to chafe against culturally imposed constraints. As a teenager in Italy, she insisted on studying subjects that were uncommon for girls, eventually graduating with a certificate in mathematics and physics. She initially planned on studying engineering but then decided to embark on an even more improbable career for a woman—medicine—and pursued this dream at the University of Rome. Many of her male professors and fellow students treated her with derision, forcing her to remain standing until everyone else had taken a seat and to perform her dissections alone, at night, when everyone else had gone home. Despite such hostility, she persisted, becoming one of the first women in Italy to graduate from medical school.

Montessori began working with children challenged by learning disabilities. She became a prominent advocate for such children, publishing articles and presenting lectures. She co-directed a school for children the existing system considered uneducable. Some of her students passed public examinations designed for normal children, helping to establish her reputation. Pursuing graduate studies in anthropology and education, she began publishing more pedagogical articles, eventually receiving a faculty position. In 1907, she founded the House of Children, a school for the disadvantaged. She developed a deep respect for children that far exceeded the standards of the day, discovering that they harbor a passion for order and discipline, a willingness to repeat things in order to learn, and a capacity to concentrate on tasks for sustained periods.

Montessori’s educational philosophy can be seen in her plan for the classroom, from its physical layout to daily routines. Learning materials were placed on low shelves that children could reach, and adult-sized tables and chairs were replaced with child-sized versions. Students could be seen moving about her large and open classrooms of their own volition, choosing and engrossing themselves in activities that sparked their curiosity. Instead of attempting to homogenize them to fit into a single mold, children were treated as distinct individuals and encouraged to explore and develop their own special interests and abilities. Independence ceased to be treated as deviance in need of discipline and became instead one of the aims of education.

The contrast between Montessori’s educational approach and the conventions of the day can hardly be overstressed. She was operating with a new anthropology, with a new level of respect for children in general and a desire to see what each child, allowed to learn in his or her own way, could develop into. The implications for liberty and responsibility were readily apparent to her. Conventional educational approaches instilled servility and dependence, by entrusting all initiative to the teacher. This, in turn, contributed to an appetite for tyranny, an expectation of dominating others. Montessori’s approach, by contrast, would avoid the cultivation of servants and tyrants and instead foster a healthy sense of respect for the capabilities and dignity of others.

To achieve such ends, Montessori argued, it is necessary for children to cultivate a healthy sense of respect for efficacy,  both their own and others’. She wrote,

Let us picture a clever and proficient workman, capable not only of producing work, but giving advice, because of his ability to direct the general activity of the environment in which he works. The man who is master of his environment will be able to smile before the anger of others, showing great mastery of himself which flows from his consciousness of his ability to do things. . . . The man who, through his own initiative, can perform all the actions necessary for his comfort and development conquers himself, and in so doing multiplies his abilities and perfects himself as an individual. We must make of the future generation powerful men, and by that we mean men who are independent and free.

To be prepared to conduct themselves responsibly toward others, Montessori held, developing human beings must first learn to respect themselves.

Montessori eschewed conventional assessment methods such as grades out of a deep antipathy to what would later be known as behaviorism. Behaviorists such as John Watson and B.F. Skinner would argue that educators should disregard human thoughts and feelings, focusing instead on how rewards and punishments can be used to alter patterns of behavior. In sharp contrast, Montessori regarded rewards and punishments as “means of enslaving a child’s spirit, and better suited to provoke than to prevent deformities.” The first duty of the educator is not to enforce discipline or force the child into any particular mold but “to stimulate life, leaving it free to unfold to itself.” The educator’s first mission is not to indoctrinate but to open up for the learner the joy of discovery.

Montessori was not anti-tradition. Instead, she was seeking to reconnect education with one of its greatest masters, Socrates, who famously held that true knowledge needs to be discovered, not memorized. As portrayed in Plato’s dialogue Meno, Socrates shows that the knowledge of how to double a square lies within an uneducated boy, waiting to be drawn out (the meaning of the Latin educare). The Socratic method is not about telling but about asking, helping interlocutors discover for themselves. Montessori, too, took seriously the importance of asking good questions, and sought to draw out this habit of mind in her learners. Likewise, she was more concerned with the development of character than memorizing facts. In these respects, she is one of the 20th century’s most Socratic of educators.

Montessori had seen this kind of liberation firsthand in her early years through her work with poor children deemed by others hopeless. Such children, who had been “enslaved by their own inferiority,” could experience a mental awakening, which she likened to the “liberation of the soul from extinction through spiritual poverty.” Instead of shuffling such children into a dark corner where they could be forgotten, she sought to help them

arise, reviving and opening up towards interests that give life to their intelligence, to witness the happiness that comes to them through every activity in which the hand becomes capable of achieving something. It is really man arising from death to the joy of living.

Lectures and books can help open our eyes to such possibilities, but it was ultimately through daily observation and interaction with children that Montessori gained such a deep appreciation for what nascent citizens and human beings are capable of.

Soon Montessori was hosting training courses, offering lectures, and publishing books about her educational methods. Within five years, they were being adopted in nations throughout the world. Alexander Graham Bell became a major proponent. Woodrow Wilson’s daughter Margaret studied the method and was said to have operated a Montessori school in the basement of the White House. Mohandas Gandhi, who expressed his hope that the Montessori approach could be adapted to his poor and populous home country, remarked in 1931

Even as you, out of your love for children, are endeavoring to teach children, through your numerous institutions, the best that can be brought out of them, even so I hope that it will be possible not only for the children of the wealthy and the well-to-do, but for the children of paupers to receive education of this nature.

Perhaps the greatest test of Montessori’s commitment to liberty and responsibility came in the 1920s and 1930s, with the rise of fascism in Italy. Initially, the government of Mussolini embraced Montessori’s approach, holding that high-quality education would spur the nation’s economic and military development. Montessori schools were granted a government charter, and the regime supported a range of Montessori initiatives, including teacher-training institutions. Yet inevitably, conflicts arose. Mussolini insisted that teachers swear fascist oaths and students sing fascist songs and learn fascist doctrine. Montessori refused. In 1933 she resigned her position with the program and in 1934 she left Italy, never again residing in her home country.

Montessori had long insisted that her educational approach was apolitical and that advocacy for children surpassed distinctions of party and power. But Mussolini’s fascist ambitions were totalitarian, and it was only a matter of time before education became ensnared in nationalism and militarism. He expressed the view that men had grown weary of liberty, that they have a surfeit of it, and that “we have buried the putrid corpse of liberty.” In stark opposition, Montessori wrote:

Mussolini and Hitler were among the first to grasp that rulers who wish to make sure of a new social order must train people to it from infancy. They drilled children and youths for years, imposing on them from outside an ideal to unite them. . . . But the cohesive social order is a natural fact and must build itself spontaneously under the creative stimuli of nature. No one can replace God, and anyone who tries to do so becomes a devil, just as when an overbearing adult oppresses the creative energies of a child’s personality.

It is hard to imagine a stauncher and more influential defender of liberty than Maria Montessori, who found freedom in its purest form not in the urbane banter of adults but in the curiosity and innocence of children, a perspective with profound implications for educational policies and practices today. In fact, she doubted that most adults could give a good account of freedom and independence. To see liberty, Montessori believed, we must look to children, for

Only in the child do we see reflected the majesty of nature which, in giving freedom and independence, gives life itself. And she gives it while following unchanging rules concerning the age and needs of the individual. She makes of freedom a law of life: be free or you die!