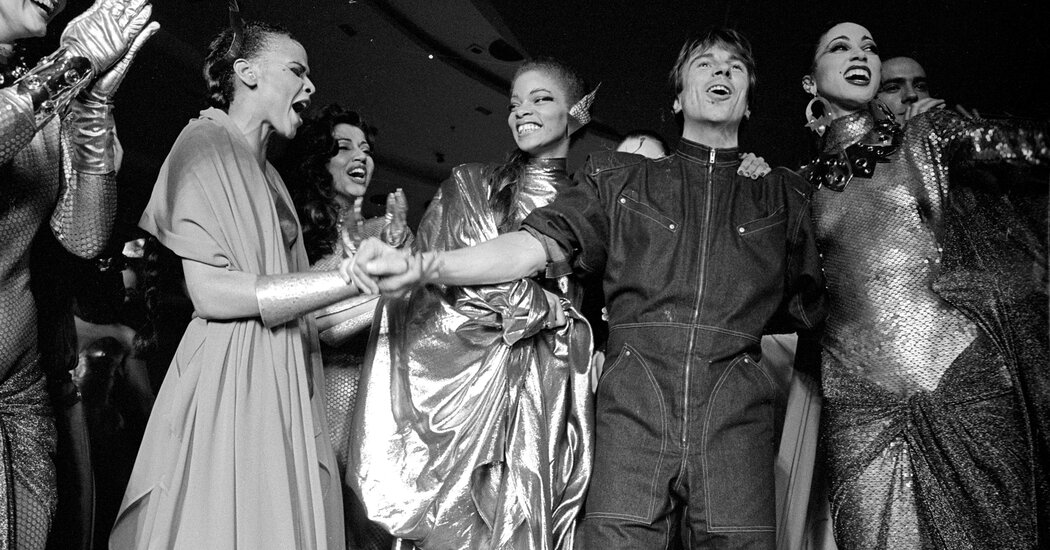 Manfred Thierry Mugler, the French designer who died Jan. 23 at the age of 73, was nothing if not exacting.

“A complete perfectionist,” said the model Naomi Campbell. “You couldn’t be one centimeter off.”

This wasn’t because he was a terror, said Joey Arias, the torch-singing drag artist, who appeared in “Zumanity,” the Cirque du Soleil spectacular Mr. Mugler helped conceive and design costumes for after retiring from his company in 2002.

Had that been the case, Mr. Mugler likely would not have amassed one of the most loyal tribes in fashion — a group that included Ms. Campbell, Mr. Arias, the hairstylist Danilo, the nightlife empress Susanne Bartsch, and the full-figured model Stella Ellis, who said in an interview that if his favorite shape was the hourglass, she was the “hour and a half glass.”

According to Mr. Arias, the designer simply knew what he wanted, and how he wanted it.

Growing up in Strasbourg, France, Mr. Mugler was a ballet dancer, and his sense of movement along with his religiosity about form and grace informed everything he did.

His social circle included models and actors, as well as drag queens and leather daddies. “It wasn’t a lightweight group,” Danilo said of Mr. Mugler’s compatriots. “But there was an elegance no matter how rough a diamond they were.”

In the early 1990s, Mr. Mugler worked with George Michael on the video of “Too Funky,” starring the supermodel Linda Evangelista. They didn’t always agree on how things should be done.

In one version of the story, there was a blowout on set between Mr. Michael and Mr. Mugler, a peace brokered by Ms. Evangelista, and a happy ending. Ms. Ellis recalls it differently, with Mr. Mugler announcing through a bullhorn, “Everybody, this is a wrap, we’re done, we’re packing.”

“Everybody was like, ‘What?’” she said. That left George Michael alone to finish the video with a single model, Emma Wiklund. “It was mind boggling,” Ms. Ellis said. “Out of this world.”

Because the outfits in Mr. Mugler’s shows were usually conceived with a specific model in mind, he frequently called them in for fittings months in advance.

“Mine were at 4 in the morning because he worked better at night,” Ms. Campbell said. “Most artists do. I would wake up at 3 and go.”

Risks were taken on photo shoots; shows ran over budget.

“It was impossible to control,” said Didier Grumbach, the former chairman of the Chambre Syndicale de la Haute Couture.

And models who walked for Mr. Mugler often didn’t work in fashion.

Djimon Hounsou said in an interview that he was homeless in Paris, sleeping on benches, when Mr. Mugler discovered him and selected him to walk in an “African summer”-themed show, which largely featured Black models. At the time, such representation on the runways was unusual.

Christy Turlington remembers being surprised that she and some of her fellow supermodels walked for Mr. Mugler regularly. “We were very bland in comparison to most everyone, and I think the reason a lot of us were in the shows was because we were in magazines and of the moment,” she said by phone.

It was, Ms. Turlington believed, a rare compromise Mr. Mugler made to appeal to buyers and editors: “They’ve got to go in there.”

One of Mr. Mugler’s favorite people to dress was Ms. Ellis. The two became friends in the late ’80s, when she was working as a makeup artist on his shoots. When Jean Paul Gaultier selected Ms. Ellis to walk a show, Mr. Mugler got jealous.

The first show she walked for Mr. Mugler was inspired by the sculptor Niki de Saint Phalle. Ms. Ellis’s outfit was a bustier made from chopped-up mirrors. Her fitting involved three men spending hours lathering her in plaster so that it could be sculpted to her body.

At the after-party for one of Mr. Mugler’s shows, Diana Ross had so much trouble breathing in one of his bustiers that she had Mr. Arias take it off for her in the car outside. And the heels Susanne Bartsch received for a show she walked in were so narrow on the bottom they might as well have been ice skates, as she put it.

Mr. Mugler’s waning interest in fashion surprised no one who was close to him. He plainly did not like the suits at Clarins, which in 1997 bought a controlling stake in his company because of the success of his perfume, Angel.

But he never stopped thinking about theatrics. About the show.