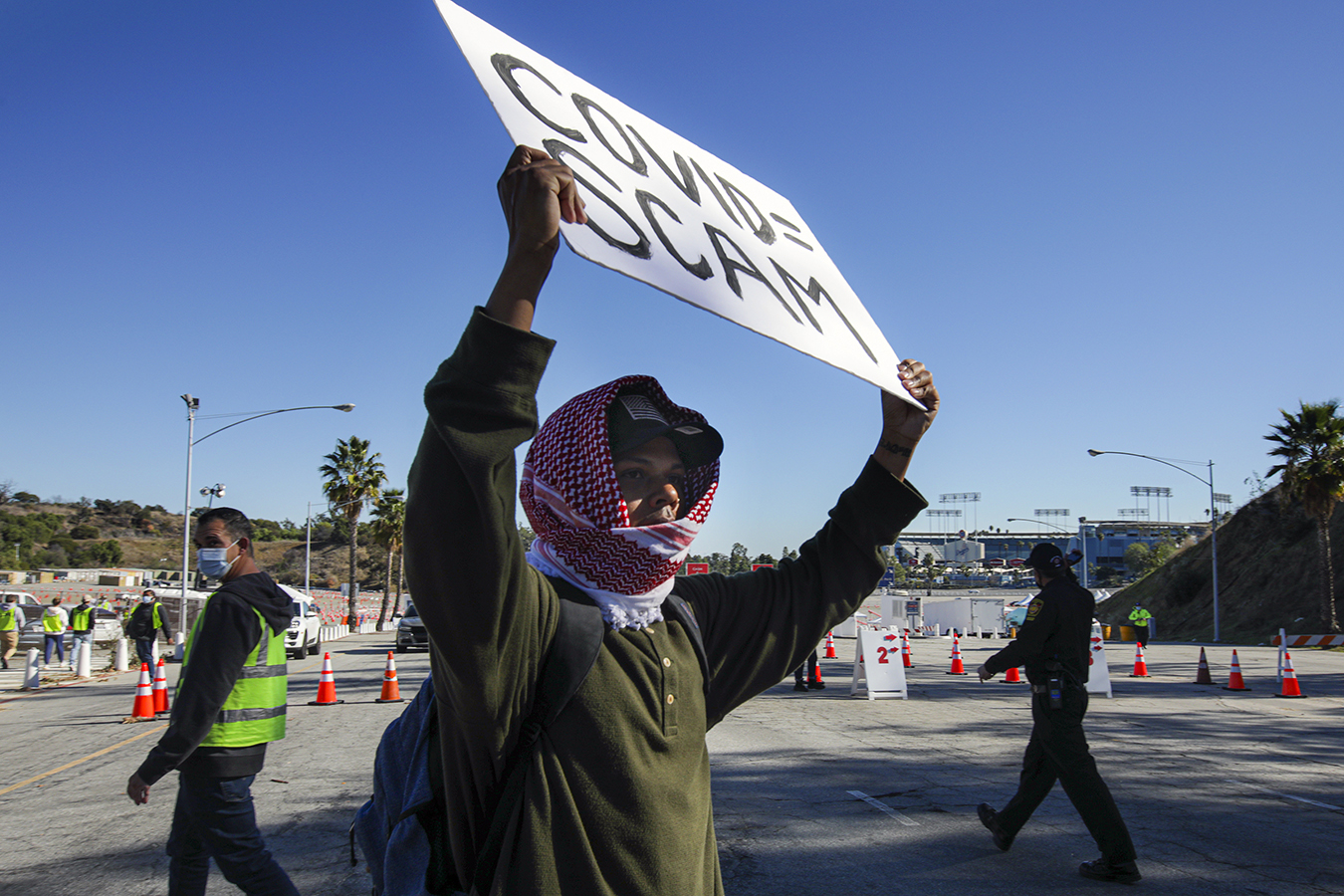 SACRAMENTO, Calif. — It’s now illegal in California to harass people on their way into a vaccination clinic, under a law signed Friday by Gov. Gavin Newsom.

But First Amendment experts continue to raise legal questions about the law’s constitutionality, including its definition of harassment.

The new law, which takes effect immediately, makes it a misdemeanor to harass, intimidate, injure or obstruct people on their way to get a covid-19 or any other kind of vaccine, punishable by a maximum $1,000 fine and/or up to six months in jail.

Even though the measure, SB 742, was amended to remove a phrase that free speech experts said made it unconstitutional, they maintain that the new version still violates the First Amendment.

“It sweeps up broad activities that are protected by the First Amendment and defines them as harassing,” said David Snyder, executive director of the First Amendment Coalition, which advocates for free speech and government transparency. “That problem hasn’t changed at all.”

But the law is more necessary than ever, said Catherine Flores Martin, executive director of the California Immunization Coalition, which promotes vaccines. Martin said she has advocated for pro-vaccine legislation for years, and that the atmosphere surrounding vaccination, especially covid vaccines, has grown threatening and toxic.

“Our biggest concern is when children are getting vaccinated,” she said. “Some of these people feel like they need to protest, and that’s scary and extremely inappropriate.”

The bill was introduced by state Sen. Richard Pan (D-Sacramento), who chairs the Senate health committee and was inspired to write this new measure after protesters briefly shut down a mass covid vaccination site at Dodger Stadium in January. Pan is a practicing pediatrician who still administers vaccines, and has been threatened, assaulted and called out by name at protests.

Pan has been at the center of California’s vaccine wars since long before the covid pandemic, and has been targeted by anti-vaccine groups for introducing laws that made it harder for parents to refuse routine vaccinations for their kids, including a 2015 law that eliminated personal belief exemptions and another approved in 2019 that made it harder to get medical ones.

“While, as a public official, I must live being threatened and stalked at my work, my home, and in my community by extremists, there is no place in the Constitution that says ordinary people and health care workers have to be subjected to that behavior,” Pan said in a written statement.

When the anti-harassment bill was introduced in February, it drew criticism from First Amendment scholars who said it violated Californians’ right to free speech.

The original bill restricted speech only “in connection with vaccination services,” which they said is problematic because it singled out a certain topic.

According to Eugene Volokh, a First Amendment professor at the UCLA law school, the government is allowed to restrict speech, but only if it’s “content-neutral” and applies equally to all protests, no matter the subject or message.

To make the bill content-neutral, the phrase singling out vaccination services was removed in early September, according to a state Senate analysis of the measure.

At the same time, lawmakers added wording to exempt “lawful picketing arising out of a labor dispute.”

That “creates another unconstitutional form of content discrimination” that has been outlawed by the U.S. Supreme Court, Volokh said

The court has twice struck down laws that restricted protesting but exempted labor disputes. In1972, it overturned a Chicago ordinance that outlawed picketing within 150 feet of a school, other than picketing arising from labor disputes at those schools. In 1980, the court found an Illinois law unconstitutional because it prohibited protests in front of homes, except in cases of labor disputes.

“I think that raises the specter that this law favors one type of message,” said Snyder, with the First Amendment Coalition. “The government doesn’t get to decide what protest message is allowed.”

Snyder said he’s also concerned by the bill’s definition of harassment and the size of the “buffer zone” in which protesters are not allowed to engage with people getting vaccinated.

The measure defines harassment as getting within 30 feet of a patient who is within 100 feet of an entrance to a vaccine site or waiting in their car to get a vaccine, in order to hand out a leaflet, display a sign, protest or engage in any education or sidewalk counseling.

Although Pan said the provision is modeled after buffer zones that protect patients entering abortion clinics, the 30-foot zone in his vaccine protest law goes further than what the U.S. Supreme Court has allowed. In 2000, the high court upheld a Colorado law that created an 8-foot “bubble zone” around a person entering or exiting an abortion clinic, but in 2014 it struck down a Massachusetts law that created a 35-foot “buffer zone” around clinics.

Because the 30-foot zone is so big, it prohibits even having a conversation with someone or asking them what they know about vaccines, which is lawfully protected speech, Snyder said.

According to the language of the law, the 30-foot zone serves as a suitable distance to prevent the spread of covid and other illnesses.

But that may not be sufficient justification to limit free speech, said Erwin Chemerinsky, dean of the University of California-Berkeley School of Law and a First Amendment expert.

And while he’s sympathetic to the idea of stopping people from being harassed on their way to get inoculated, he said he’s concerned about the constitutionality of the labor exemption and the size of the buffer zone.

“I would expect if this gets adopted, it will get challenged,” Chemerinsky said.

For Crystal Strait, the board chair of ProtectUS, an advocacy organization that promotes public health, the law strikes a balance between protecting free speech and protecting the community from covid. Pan is an honorary chair of her organization, and she has witnessed the kind of yelling and harassment he’s trying to prevent.

“I’ve seen people yell into a bullhorn literal lies about the vaccine and how these young people were going to die,” Strait said of a recent clinic where teenagers were getting shots. “They’re just there to spread misinformation.”

Joshua Coleman, co-founder of the group V is for Vaccine, which argues vaccines carry risk, often protests at vaccine clinics in parks with his bullhorn, including one Pan attended in July. He says he plans to sue once he or one of his members gets arrested under the new law.

“This bill is a violation to our constitutional rights to peacefully assemble,” Coleman said. “It just takes somebody actually enforcing it.”