The Battlefield franchise is no stranger to bugs and post-launch fixes. However, 2042’s launch was marred by an abundance of game-breaking issues that left many fans questioning the staying power of their favorite FPS franchise. In past months, DICE responded to the widespread scrutiny, promising a batch of upcoming updates to remedy an assortment of issues while implementing fan-favorite, currently-absent features. The details surrounding these promises were unpacked in an extensive Twitter thread posted by the official Battlefield Direct Communication account. An upcoming batch of Battlefield 2042 updates will refresh the in-game scoreboard, address cross-platform VOIP, and amplify/stabilize overall performance.

The Twitter thread (see above) states that the first update, 3.1, is scheduled to go live tomorrow and “delivers a handful of small fixes and improvements to the game focused around stability.” Moving forward, February is slated to see a bevy of larger-scale changes, including a “Scoreboard Refresh. A WIP screenshot of this can be seen below and offers a glimpse at imminent quality-of-life features like ribbon progression, match stats, and more. 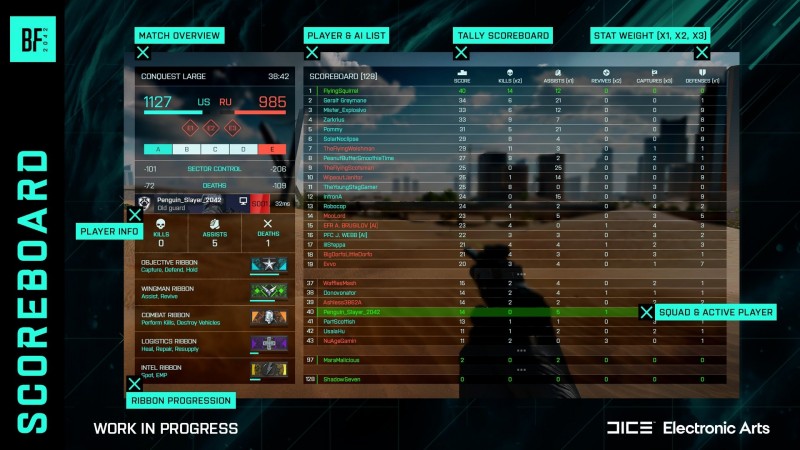 Additionally, matchmaking preferences across the All-Out Warfare game mode and cross-platform VOIP (voice over internet protocol) are being tackled. “No updates on these two today,” one thread comment reads. “But we wanted to reassure you all that these are still front of mind and we’ll have more to show and share on these topics further down the line.” According to Battlefield Direct Communication, there’s still much to be done, but players can rest easy knowing the team is hard at work.

In his review, Game Informer video producer Alex Van Aken gave Battlefield 2042 a 7 and concluded, “Battlefield 2042 is an easy recommendation for existing fans or players looking for a modern war game, but I struggle to fully endorse it due to its current lack of polish. As long as DICE continues to publish hotfixes and patches as they have, Battlefield 2042 could eventually become a go-to online shooter, but it’s a shame it was released like this.” Hopefully, this incoming set of fixes can help revitalize the latest chapter in the beloved franchise.

Are you looking forward to the Battlefield 2042 updates? Let us know what your in-game experience has been like in the comments below!