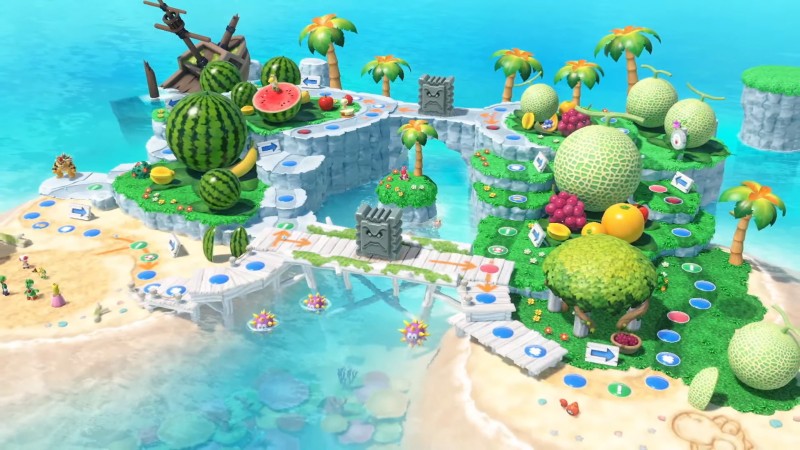 Nintendo has announced more details surrounding Mario Party Superstars, the upcoming greatest-hits release of the long-running Mario Party series. This forthcoming release for the fan-favorite franchise collects 100 of the most popular minigames in the franchise’s history, as well as five classic game boards from the early Nintendo 64 days of the series. We already knew about Peach’s Birthday Cake from Mario Party and Space Land from Mario Party 2, but now we know all five classic boards on which players can expect to battle it out.

On top of those two, players can expect to smash dice blocks across Yoshi’s Tropical Island from the original Mario Party, Horror Land from Mario Party 2, and Woody Woods from Mario Party 3. On Yoshi’s Tropical Island, you travel between two islands to try and visit Toadette to buy a star, but players need to watch out, as she can trade places with Bowser at any time. In Horror Land, players can safely stroll by the King Boo statue during the day, but at night, it can steal stars from players and passersby. Woody Woods puts players on the defensive as they watch out for Monty Moles, who can change the board’s direction when you least expect it.

If you’re more in it for the minigames, you can head to Mt. Minigames to get a focused blast of them. You can take part in minigame-only courses and compete against friends or strangers across the globe using Nintendo Switch Online. Players can also see who can get the longest win streak in Survival, or work together in the co-op multiplayer Tag Match. Mt. Minigames has seven courses for players to enjoy (though Nintendo notes that some courses can only be played online).