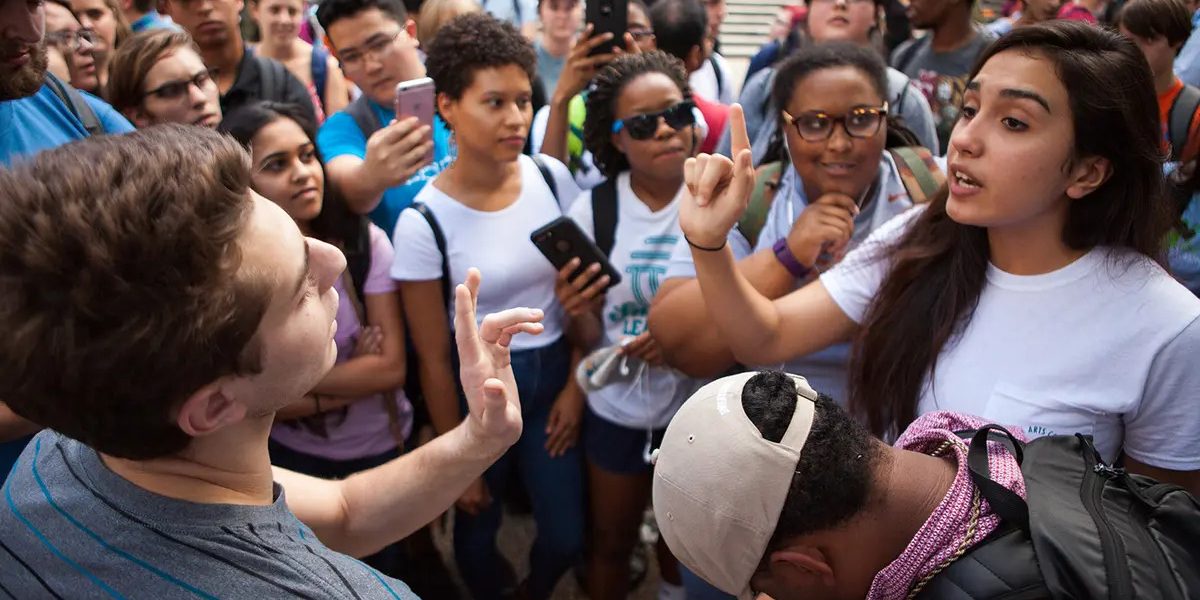 Can higher education leaders expand campus free speech and intellectual diversity? The answer is abstractly yes. A November 2021 report by the Bipartisan Policy Center (BPC) in Washington frames the importance of these speech and diversity issues, but it also suggests the challenges to real improvement.

The process that led to the BPC report “Campus Free Expression: A New Roadmap” was begun in December 2020. A blue ribbon panel was convened by Jacqueline Pfeffer Merrill, Director of the Campus Expression Project, one of the eight policy areas of interest to the BPC. The panel was co-chaired by Jim Douglas, former Governor of Vermont, and Chris Gregoire, former Governor of Washington, and included six former or current presidents from various types of campuses and four other specialists. The members took their task seriously and met weekly online. A panel of students was assembled to provide their perspective on campus speech issues. Another group of presidents and trustees was given the final draft for their comments. Occasionally, specific panel members are quoted by name, but most of the report has all of the virtues and liabilities of committee speak.

America is suffering from a crisis of confidence in many of its leading institutions. Among the most important institutions whose trust among the public has sharply fallen in recent years is higher education. . . . We believe a major cause is the erosion of a campus culture of free expression and open inquiry.

There is overwhelming survey research and other evidence that the intellectual climate on many college and university campuses is being constrained. Faculty are being deterred from exploring certain subjects and expressing candid opinions  even off campus; students are self-censoring; outside speakers are disinvited and events are being canceled.

Rather than alleviating the political polarization in our nation today, the inhibition of campus speech is degrading the civic mission of higher education which is to maintain our pluralistic democracy by preparing students for civic participation as independent thinkers who can tolerate contrary viewpoints and work constructively with those with whom they have principled disagreements.

These are not novel assessments, but given the distinction of the panel members and the careful process for constructing the BPC report, it may be influential in higher education circles.

The BPC report outlines some of the challenges of expanding free speech and intellectual diversity, but what are the solutions?

Take the problem of campus public policy debates, for example. The report proclaims: “As a country, we must do better at robustly and respectfully debating difficult policy issues across the political spectrum, and college campuses have an essential role in achieving this civic role.” Almost all US citizen students are eligible to vote, and many campuses invest in registration drives. Students exposed to civil debates on public policy issues may become better informed about their complexities, costs and benefits, and unintended consequences. They may feel freer to express their own views in thoughtful ways. BPC’s support for sponsoring respectful campus public policy debates for all students and other community members is surely on target.

Yet research shows a massive higher education avoidance of that responsibility. A national stratified survey of 97 campuses and 28 law schools covering 24 major public policy issues in 2014 and 2015 documented that very few issues were the subject of institutionally sponsored open debates. Almost no university had any organized program for these debates comparable to campus sponsored athletic, musical or theatrical programming. When that same research template was repeated to cover all 35 public and private campuses in North Carolina in the 2018 and 2019 academic years before Covid struck, the same dismal reality was found.

Or take the problem of decreasing campus ideological and political diversity. The BPC report states: “While campuses are becoming more diverse in many ways, they have become increasingly ideologically conformist.” Research confirms that very few universities are committed to intellectual diversity or even ideological neutrality in advertising for their jobs. But what to do about this problem and who should take action remains uncertain. Imposed off-campus remedies may be clumsy and counterproductive.

Universities today are awash in the language of social justice, racial justice, gender justice, and environmental justice. There is also a ubiquitous commitment to diversity, equity, and inclusion, backed up by growing well-funded DEI bureaucracies with a mandate to oversee everything. These terms are rarely carefully defined, so candidates for hiring or even admissions at selective campuses must wonder just how far left they need to lean to appear to conform to these uncertain criteria. A 2020 Gallup Poll found that 49% of undergraduates say free speech conflicts with diversity and inclusion occasionally and 27% said that occurs frequently.

The result of the injection of these ideological tests for acceptance on campuses should not be surprising. The political affiliation of faculty in politically relevant fields was measured in 2016 by Mitchell Lambert and his colleagues. Overall, this research showed professors registered as Democrats outnumber Republicans by 11.5 to 1.

University towns are often blue islands in a red sea of their surrounding communities. In North Carolina, a purple state for example, at its four most selective campuses the number of faculty political donations to Democrats to Republicans was 86 to 0. If money talks, what is expressed in classrooms?

The problem is not just a partisan imbalance. There may also be a policy imbalance as well. For example, in a large department or school of education in which no faculty members believe in school choice or even that it is a subject that should be seriously debated, that may be reflected in what can be taught, researched, or published—which will eventually affect hiring and tenure.

Should a speaker transgress any of the vague justice or DEI concepts, a campus may erupt with cries from student activist groups that the speech was hateful and made them feel unsafe or excluded. The administrative response to such protests is often apologetic for the distress the speech caused and sometimes to offer emoluments to meet the offended groups’ demands for additional subsidy, space, or staffing. If it is a public campus, part of the apology may include a statement that, although we want to distance ourselves from the speech, the First Amendment gave us no choice but to allow it. Rarely will the response be a careful delineation of the legal distinction between protected and unprotected speech as is done in publications by The Foundation for Individual Rights in Education. Nor will there be an invitation to further debate the contested subject because the activists just want the speaker and the offensive ideas gone, or as in UK universities, deplatformed.

Creating a Scorecard of Metrics

The BPC report has a number of helpful suggestions for trustees, administrators, faculty, and student life officers about how campuses can anticipate speech and diversity problems and respond more thoughtfully. It proposes regular campus climate surveys and contains a number of tabletop exercises for stakeholders.

The report, however, avoids any hard markers for measuring necessary future changes. It states: “. . . in this period of stress on these principles (academic freedom and free expression) each college must examine and affirm principles through its own processes. That is why as a task force we do not endorse specific statements, policies, curricula or programming, although we are providing a resource guide of programs and approaches. . . .” Though about 74% percent of the 19.6 million college students attend public campuses bound by First Amendment principles, there are almost 4,000 higher education institutions in the United States and their diversity is a strength. Still in the above BPC grading system, every campus should get at least a “pass” which creates an exit door for campuses comfortable with the status quo.

Real change expanding free expression and intellectual diversity, however, will require a scorecard that is absent from the BPC’s work. For example, for those public and private campuses that affirm these values:

More important, however, is the warning in the BPC report to the whole higher education community that continued weakening of free expression and intellectual diversity on campuses is eroding public support for them and for democracy itself. To implement the values in BPC’s report, however, more than rhetoric is needed. Accurate measurement of what actually takes place on campuses will be necessary.