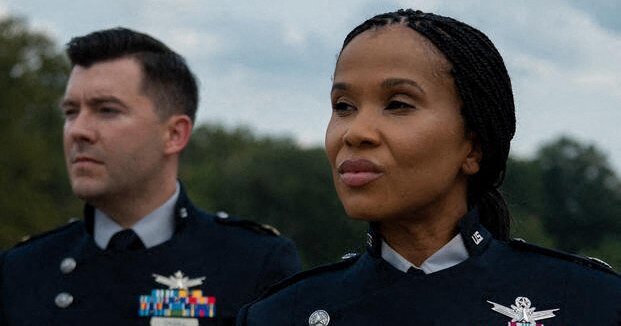 When President Donald J. Trump signed the act establishing the United States Space Force in 2019, he made not only a sixth branch of the military but also a design challenge for the ages. The visual identity for a new armed service would have to be created from scratch, for the first time since the Air Force became independent from the Army in 1947.

Never mind that some critics have called the Space Force a silly waste of money, and Netflix released a show starring Steve Carell, “Space Force,” which satirized the agency and its mission to “protect the interests of the United States in space.”

Jacqueline Whitt, a professor of strategy at the U.S. Army War College, said the Space Force has to “at once signal seriousness. But they’re also aiming for this distinctive look that’s not about putting astronauts on the moon.” Everyone in the Space Force, she added, is working in offices “earth-side.”

After previous unveilings of the name for service members (“guardians”), its logo (which centers on a delta symbol) and rank insignia (deltas, globes and orbit rings), last week the Space Force showed prototypes of its new service dress.

The uniforms’ most prominent feature was the asymmetrical cut of the coat, which buttons on the right rather than in the middle. Six silver buttons run diagonally down the front, to represent the sixth branch of the military.

Although the new uniforms were not as obviously ridiculous as those on the Netflix show — battle fatigues in moon-crater-pattern camouflage — they still drew criticism and mockery in some circles. The general tone was that the visual identity of Space Force is drawing from Hollywood science fiction. That it’s more costume than uniform.

“The US Space Force Will Wear Battlestar Galactica Uniforms,” ran the headline of an article on the culture website Giant Freakin Robot, referring to the classic TV show. Kristi Eckert, the author of the article, also found style echoes of the uniform worn by Captain James T. Kirk in the 1982 movie “Star Trek II: The Wrath of Khan.” “Even though Kirk’s uniform is a deep red in that film and lacks the buttons,” she noted, “the cut of the jacket is very similar.”

But any similarities to Hollywood’s version of space soldiers is “a coincidence,” said Tracy Roan, chief of the Air Force uniform office, which is responsible for Air Force and Space Force uniforms.

“I don’t have Trekkies in my office,” Ms. Roan said. “The whole asymmetrical design concept has existed in military uniforms since the beginning of time.” (In fact, the homage likely goes the other way: The uniforms for the original “Star Trek” TV show resemble those of the Navy.)

Still, “we wanted the jacket to be more futuristic looking,” said Catherine Lovelady, the project manager for uniforms and heraldry cultural items for the Space Force, who worked with Ms. Roan on the design. “It doesn’t have as much stuff on it as other military uniforms. It’s a much more modernistic take.”

Space Force uniform design was handled out of Wright-Patterson Air Force Base in Dayton, Ohio, where the staff includes designers, patternmakers and textile engineers. More than 150 iterations were created, and a focus group of guardians was gathered to weigh in.

One detail lost in all the jokes on Twitter is that Space Force uniforms were designed with female service members in mind. It’s a recognition that in today’s military, women serve in combat and leadership positions alongside men.

“The first jacket was made for a female,” Ms. Lovelady said. “We wanted to ensure whatever we made would fit the female appropriately. That took at least eight fittings. Then we entered a male into the process. As far as I know, that’s the first time a service has done that.”

Since women have been officially part of the armed services, in almost every case their uniforms have been modified from men’s, going back to the Navy in 1917. In civilian auxiliaries of the U.S. military, women’s uniforms traditionally “try to strike this balance between practicality and I would call it performative femininity,” Ms. Whitt said. “Skirts were the default for a long time, which accentuate waists and hips. It was about trying to reassure parents, husbands and boyfriends that women, if they join the military, are not losing their femininity.”

Military uniforms are one style for every body; they fit no one exactly right. Online message boards are full of grumbles from enlistees. But female members especially have struggled with fit and comfort in the past.

“I remember the pants weren’t very comfortable,” said Amanda Huffman, host and creator of the podcast “Women of the Military,” who served from 2007 to 2013 in the Air Force. “The tops never quite fit like they were supposed to. The shoulders fit, but it was baggy in the body.”

Ms. Huffman still remembers the one set of fatigues that fit her well: a fire-retardant uniform she got when deployed to Afghanistan. “Me and another girl picked that uniform nine times out of 10,” she said.

Unfortunately, during last week’s Space Force presentation, the pants worn by both guardians, but especially Ms. Gonzalez, were saggy and baggy and in serious need of tailoring, prompting even more howls from Twitter fashion critics and those who find the idea of a Space Force dubious.

Ms. Huffman, whose husband is in the Space Force, and who recently went shopping for uniforms with him, was more forgiving in her assessment.

“I don’t love it, but I don’t hate it. It’s a new uniform,” she said. “It’s really hard to create something new, and easy to be critical. It’s different.”

She added, “I do like that they’re trying to design it to fit women because that’s really needed. If women are comfortable, it doesn’t really matter what it looks like.”