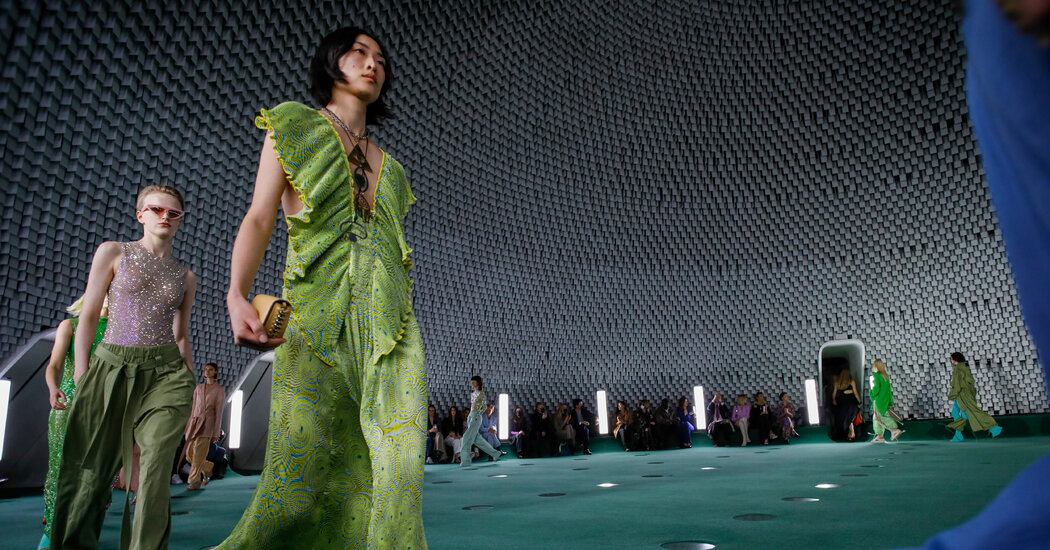 PARIS — On the penultimate day of the ready-to-wear season the environmental conscience of fashion, which had been poking its head out tentatively over the past few weeks, finally made its full-throated entrance. Well, hello sustainability. Wondering when you’d show up.

The industry’s role in climate change was, after all, one of the great mea culpas of the pandemic. The rise of resale has been one of the more meaningful developments over the past 18 months. But it was easy to forget, it seemed, in the sheer hoo-ha of being back; safer to avoid, perhaps, lest charges of greenwashing rain (understandably) down.

Then Stella McCartney put 50 shades of nature on the runway and made mushrooms her muse. Morels are not just for foodies any more.

Under the Brutalist concrete dome of the Espace Niemeyer, the headquarters of the French Communist Party, which it turns out also bears a marked resemblance to a Martian bio-dome, the voice of the American mycologist Paul Stamets boomed out, reciting a paean to the powers of fungi to open the show.

“In fashion,” he intoned with great sincerity on the soundtrack, “mushrooms are the future” (also featured was synthesizer music created by taping the sounds of mushrooms growing; yes, you read that correctly). Mushrooms form communities, survive — and thrive — in difficult environments, and are a source of sustenance. Plus, increasingly, their root systems form the raw material for … substitute leather!

And they are also, it turns out, as good a font of aesthetic inspiration as Marlene Dietrich in her heyday. Certainly, they helped Ms. McCartney create one of her more compelling collections in seasons.

It was rooted in the bodysuit, two curving paramecium shapes cut out at the neck and side, paired with billowing parachute-silk anoraks, or airy cargo pants, sliced open at the side. It grew via a hand-drawn toile de Jouy featuring (yes) fungi rather than flowers or animals, in dresses and crop tops dripping fringe. And then spread to encompass knits featuring biophilic tracings and tea frocks with the torso shirred to resemble the undersides of a portobello, or with a ruffle on the front like the frills of a chanterelle.

A trio of sequined looks came in all shades of green, from bright new leaf to olive. There was even a neat little black leather crescent of a bag made from Bolt Threads’ mycelium leather (it’s called Mylo), though the process is still so new, only 100 will be produced. It’s easy to roll your eyes at that — 100 bags is not exactly going to move the dial when it comes to accessory waste in the world — but it’s a start. Sixty-three percent of the materials in the collection are eco-friendly, according to the fashion brand.

The result was a fricassee, very well done. Bring on the shiitakes, the truffles and the porcinis.

They might have added some umami to Giambattista Valli’s macaron box celebration of prettiness in tulle, roses, rhinestones and lace, anyway. Backstage before the show, in front of a mood board scattered with pictures of gardens and tables laden with elaborate china settings he’d found on Instagram, he talked about beauty as a balm and as an escape. Fair enough. But it was hard to shake the image of Versailles before the revolution, drowning in sugar.

Just as at Chanel, Virginie Viard’s decision to pay homage to the 1980s via a recreation of the raised runways of that decade, models twirling for the photographers jammed up together and flashbulbing away at their feet, struck an off note — though the clothes themselves had notably and effectively lightened up.

There was a charmingly kitschy Côte d’Azur vibe to bathing suits and bouclé shorts suits in juicy shades; abbreviated, sparkling black and white coat dresses; slouchy flower power denim; and a finale of butterfly silks that fluttered about with the breeze.

They were pretty, with a kick. There just wasn’t much subtext to them.

At least at Maison Margiela, the designer John Galliano was revisiting a host of historical character/costume mash-ups through both storytelling and his increasingly alluring facility with reinventing old garments, not merely referencing social codes. (That’s an approach that seems less and less sustainable.)

The house has an entire, semi-ridiculous lexicon of its own for this — recicla (as in recycle); essorage (enzyme treatments that age a material); poverino (the combination of many vintage garments into one). But, like Marine Serre, who unveiled her collection earlier in the week, Mr. Galliano is making one of the most accomplished arguments for upcycling (let’s call a spade a spade) not as a niche sideline but as the main event on the runway.

There were herringbone greatcoats scrimmed in tulle and decorated with old fishing lures; candy-colored shifts and skirt suits with the seams and lining on the outside; a slither of a flapper dress made from chains of clear, recycled eyeglass lenses layered over black lace.

Loden wool was mixed with denim and terry (terry is having a hero moment in the upcycling arena), knitwear pieced together like Delft tiles, and a wool dress sliced here and there like it had been pecked apart to reveal the red lace beneath. There were latex socks, and the house’s signature tabi boots recreated as thigh-high Crayola-colored recycled rubber waders.

Just in case anyone was wondering what to wear to COP26, the U.N. conference on climate change, when it starts in Glasgow later this month.