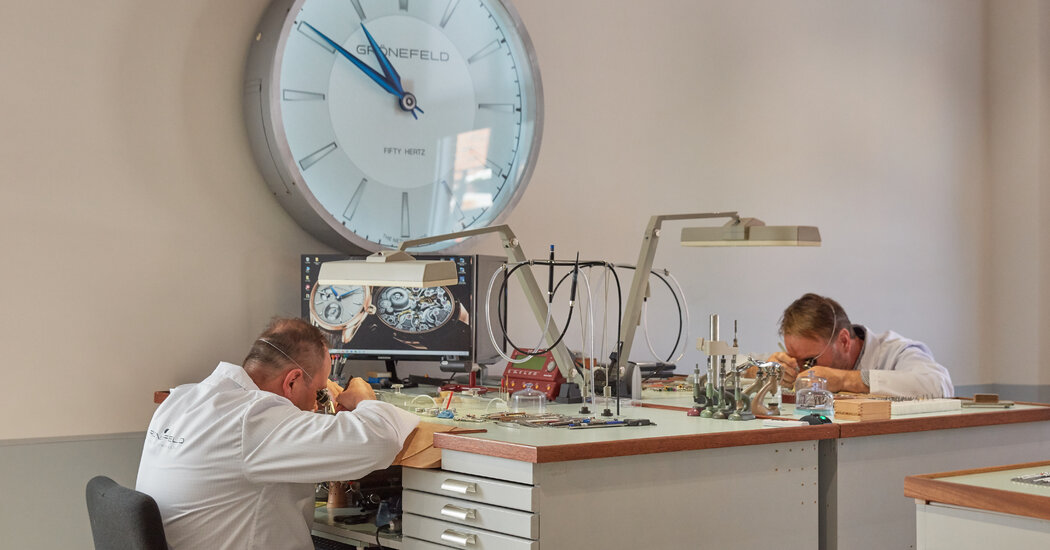 If you think buying a choice Rolex has become nearly impossible, try buying a Grönefeld.

Last month Bart and Tim Grönefeld — the Horological Brothers, as the co-founders of Grönefeld Watches are known — announced on Instagram that they were “fully booked” and would not be taking orders until further notice.

“It is very sad news and a difficult decision,” Bart Grönefeld said in a video interview from their workshop in Oldenzaal, the Netherlands, near the border with Germany. “But we felt we had to do it to keep our promise to clients.”

The post on Grönefeld Watches’ Instagram account — which drew more than 100 comments, ranging from congratulatory to disappointed — was not that business was bad, but that it was too good.

“We have been getting 200 emails for every watch and 50 orders every weekend,” Mr. Grönefeld said. “We were falling behind in production and having a genuine problem deciding what to produce and when to work on new ideas.”

High demand is hardly disastrous for most businesses, but for small, independently financed watch brands like Grönefeld, Thomas Prescher Haute Horlogerie or Akrivia, it can turn into a complex tangle of limited resources, lack of time and overwhelming expectations of the collector community that supports them.

Since founding the family-owned brand in 2008, the Grönefeld brothers have built a reputation well beyond their native Netherlands as creative watchmakers respected by industry peers, evidenced by two prizes from the Grand Prix d’Horlogerie de Genève.

The brothers and their 13-person operation have an annual production of 70 watches. “Clients love our hand-finishing and the design language we have invented, especially the bell-gable shape of the steel bridges in our movements, inspired by the canal houses of Amsterdam,” Mr. Grönefeld said. “Some clients will accept to wait three to four years for a watch, but others have a hard time.”

The Grönefelds are not alone. “We are seeing tremendous interest in a few independent brands who make between 25 and 200 watches per year,” said Leon Adams, owner of Cellini, a watch and jewelry retailer in New York. “They are desirable because they offer unique designs, small production numbers and the craftsmanship of some of the world’s best artisans.”

The recent upsurge in demand, Mr. Adams said, has been fueled, at least in part, by the brands’ increased use of Instagram and the visibility it has brought them.

“Without advertising, many were completely unknown,” Mr. Adams said. “Now, with social media, they are getting their name and their product out there.”

“Clients are now asking to be on a waiting list for our next model even though they have not seen it,” he said. (At Cellini, 75 percent of the watches scheduled to be received next year from independent brands like Grönefeld are already sold, Mr. Adams said.)

A new Grönefeld complication is scheduled to be unveiled later this year. “We need diversity in our projects,” Mr. Grönefeld said. “We want to show the world that we are capable of creating innovative pieces, and not always making the same watch.”

Thomas Prescher, the master behind Thomas Prescher Haute Horlogerie, said the vocation is not a simple one. “To succeed as an independent, it is not enough to be a superb craftsman, you must also be an extrovert, a bookkeeper and an entrepreneur.”

Until last year, when he hired two watchmakers, Mr. Prescher worked alone. He does not advertise, and every watch he makes is designed for the client.

He knows that managing expectations means persuading collectors that the wait for a watch will be lengthy. “People are not used to waiting, especially if they are spending 100,000 francs on a watch,” Mr. Prescher said. “One of my clients has waited six years for a bespoke watch with an original in-house movement.”

But, “I am an artist, not just a craftsman,” he said. “I design watches with a sense of symmetry in the proportions of the ‘Golden Rule’ of Pythagoras that defines the connection between mathematics and beauty.”

Rexhep Rexhepi, founder of Akrivia, who makes fewer than 40 watches a year, knows about the pitfalls of running his own business.

“We put in a lot of time and research in designing the piece with a neo-Classical symmetry and hand-finishing in the purest artisanal sense,” Mr. Rexhepi said in a phone interview from Geneva, where he is based. “I want our product to be recognizable by its design.”

So in August, after word got out that a successor to the Chronomètre Contemporain, the sold-out model he introduced in 2018, was in the works, Mr. Rexhepi deleted all the posts on Akrivia’s Instagram account.

“That caused much unwanted publicity,” Mr. Rexhepi said. “We were not closing our order books, we wanted to open a new chapter.”

Kari Voutilainen, who will mark the 20th anniversary of his namesake brand in 2022, seems to have mastered both superlative watchmaking and effective entrepreneurship.

“We have nothing in stock because every watch is made in collaboration with the client,” Mr. Voutilainen said in a phone interview from his workshop in Môtiers, Switzerland, where he employs 30 people. Last year, he produced 67 watches.

“The client comes in, we discuss the design of the watch, its features, the material, and I prepare an estimate,” he said. “We require a 30 percent deposit which keeps both sides motivated to see the project through.”

Mr. Voutilainen said he believed the client’s involvement in every significant stage of the creative process made the two-year wait more bearable. “That watch will have a story and a personal meaning to its owner,” he said. “Here, you are not one of 60,000 clients.”

Maximilian Büsser, founder of MB&F, has been approaching the same situations a bit differently. Unlike his peers, he is increasing his brand’s production slightly and introducing an unlimited series (the business previously focused on limited editions).

“We will slowly increase production by an annual 11 percent over the next four years, which is still below demand that is up 40 percent,” he said. Last year, MB & F made 215 watches.

The move is intended to address what Mr. Büsser called an “avalanche of demand” for his creations. “In a world where everyone has gone industrial, our methods are still artisanal, which is what haute horlogerie is about,” he said.

This month MB&F plans to introduce the new unlimited-production model, the $176,000 Legacy Machine Perpetual Evo Titanium. Twenty will be made each year and, regardless of the number of orders, every order will have a two-year wait.

“We have no intention of growing because what is important to us is to be completely free, economically and creatively, to do whatever we want,” Mr. Büsser said. “This is our company, our money, and we just want to be happy and proud.”