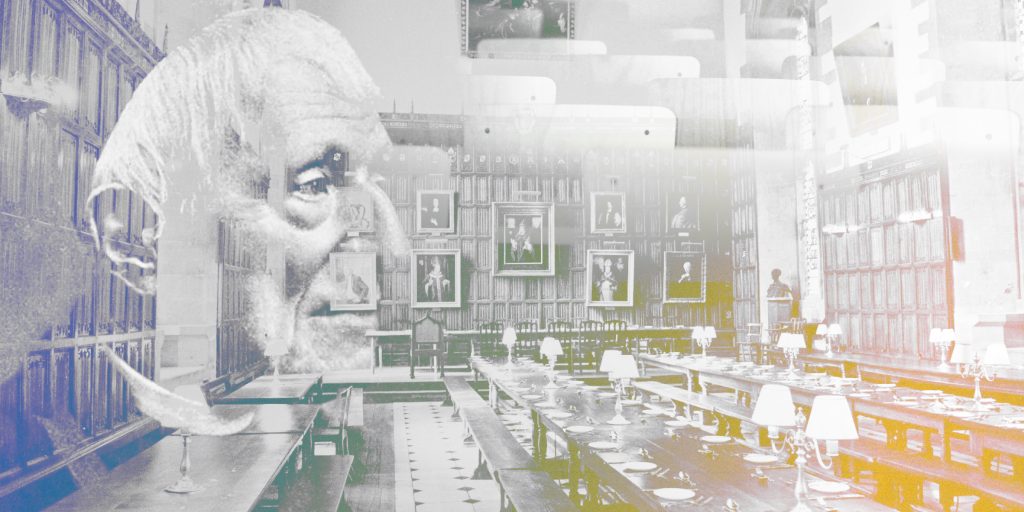 St. John Henry Newman advised in his Idea of a University that, if forced to choose, it would be better to abolish the classrooms and fire the instructors than close the dormitories and dining halls. Students, he argued, learn more through conversations with their peers than through what we today call “content delivery.”

I have overheard enough dining hall conversations to know that Newman’s recommendation exaggerates the quality of those encounters. Plato’s Euthyphro is rarely the topic of choice for students enjoying their third hamburger of the week on a Wednesday. Whether his picture of undergraduate life is hyperbolic or our reality shambolic, we have with notable exceptions chosen the opposite of what he recommended.

At the start of the pandemic in March of 2020, colleges and universities throughout the country shut down all personal encounters, closed the doors to the dining halls, and went online. All the “content” was delivered through the internet. In the Fall of that year, most tried to find ways to have some students in the classrooms with a hybrid model (half the class in the room and half online), but the social aspects that Newman endorsed were significantly curtailed.

A year later, now 18 months into the pandemic, with a vaccine widely available and mandated at most institutions—usually over 90% compliance among students, often more among staff—the nation’s colleges and universities are still focused on content delivery over conversation. The rules are, in some cases, more draconian than they were a year ago.

There are effectively no dining halls at Brown anymore. All their dining services are take-out and students are strongly discouraged from going to restaurants off campus. What’s more, they have been instructed to restrict their social encounters. Under the heading of “Refrain from Small-Group ‘Hopping,’” they have been given the following instruction: “Students are expected to consistently engage with the same small social group, rather than attending or “hopping” among multiple small-group gatherings over the course of a day or short period of time.”  Are these young adults or little children?

I pick on Brown only because they are so honest. Their rules are openly posted online and, what’s more, they admit in those very rules that, “there is no evidence of spread in classrooms.” Such evidence has not stopped other institutions, my own included, from requiring vaccines, masks inside and out, multiple PCR tests per week, and all sorts of other restrictions. Brown is not an outlier, by any means. Some colleges and universities are now more restrictive than nursing homes.

What will be the result of all this? There is no way to know. Maybe all that “content” will be delivered as hoped and students now in university will thrive in their careers. But we can see a certain type of person being cultivated and formed by our rules and policies. Students are now asking, even demanding that their institutions impose mandates on them or, more precisely, on others. Graduate students in Iowa staged a “die in” to demand stricter measures. For many of these young people, the policies do not go far enough.

An older instructor I know, teaching part time at a university I shall not name, was having a very hard time hearing students through the mandatory mutual masks. He asked students to briefly pull down their masks when asking questions. For doing so he was anonymously reported to the administration by a student. The student was only following orders. Reporting infractions is university policy. Cancel culture has been extended to Covid rules, reducing even more of our interactions to crossing minefields.

Forget for the moment the policy of masking vaccinated eighteen-year-olds. If a student really was so scared of speaking one sentence without a mask, leave it on. Maybe parents don’t ask their children this question anymore, but would you jump off a bridge if a professor asked you to? That sort of compliance is dangerous, but so is the other part, reporting him.

We have taught young people to fear power and worship it. On the one hand, they fear the power of a teacher so much that they do not object at the time to things they find life-threatening. On the other, they turn to anonymous tip lines, hoping that bureaucratic processes will save their lives. Never more true were Tocqueville’s words, “I do not fear that in their chiefs they will find tyrants, but rather schoolmasters.”

American education has not been attentive to the development of citizens of a democratic republic for quite some time, but the last eighteen months have been especially poor in this regard. All of the pathologies of individualism endemic to democracy have been exacerbated by the online classes, masks, and enforced distancing. Classmates, teammates, and simple friends have been “distanced”: “the bond of human affections is extended and loosened.”

Alexis de Tocqueville foresaw this danger and described it only a dozen years before Newman’s warning about promoting delivery over conversation. Writing of the soft despotism to which democracies are prone, we can see in his words the present condition of our universities: “it does not tyrannize, it hinders, compromises, enervates, extinguishes, dazes, and finally reduces each nation to being nothing more than a herd of timid and industrious animals of which the government is the shepherd.” Some may dispute the tyrannizing part, but the rest seems to be perfectly accurate.

Tocqueville and Newman feared what C. S. Lewis would describe, a century after them, as “men without chests.” Admitting that the Oxford education he described in his book was not the ideal moral education, Newman could see that it formed characters that would not be bent or bowed:

but if I must determine which of the two courses was the more successful in training, moulding, enlarging the mind, which sent out men the more fitted for their secular duties, which produced better public men, men of the world, men whose names would descend to posterity, I have no hesitation in giving the preference to that University which did nothing, over that which exacted of its members an acquaintance with every science under the sun. (Idea of a University, VI.9)

The pandemic will end, and yet Covid-19 will remain in some form or other. Much of life will return to normal, except for those seeking the chimera of “zero-covid.”  But what kinds of men and women will we have produced? We can get a good indication from the recent episode of a rude encounter New Yorkers used to take pride in. Frederick Joseph claimed to be on the receiving end of racially charged remarks by a woman on the street. He filmed the latter half of the encounter and put it online with the express intention of getting her fired from her job. It worked, of course, and he was pleased with the result.

It is assumed, especially after the heroism shown after 9/11, that crises bring out the best in people. They do, if they elicit courage. They don’t, if we respond with its opposite. And in bringing out the worst, this crisis has fallen into the pattern of much of contemporary American society: make the children suffer.

From easy divorce to failing schools, from Instagram’s knowingly deleterious effect on young girls to the Irreversible Damage of “rapid-onset gender dysphoria” (a study suppressed by the same Brown University that has closed all of its dining halls because of 82 asymptomatic test results), American society is quick to allow the children to suffer. That was not the intended meaning of Matthew 19:14.