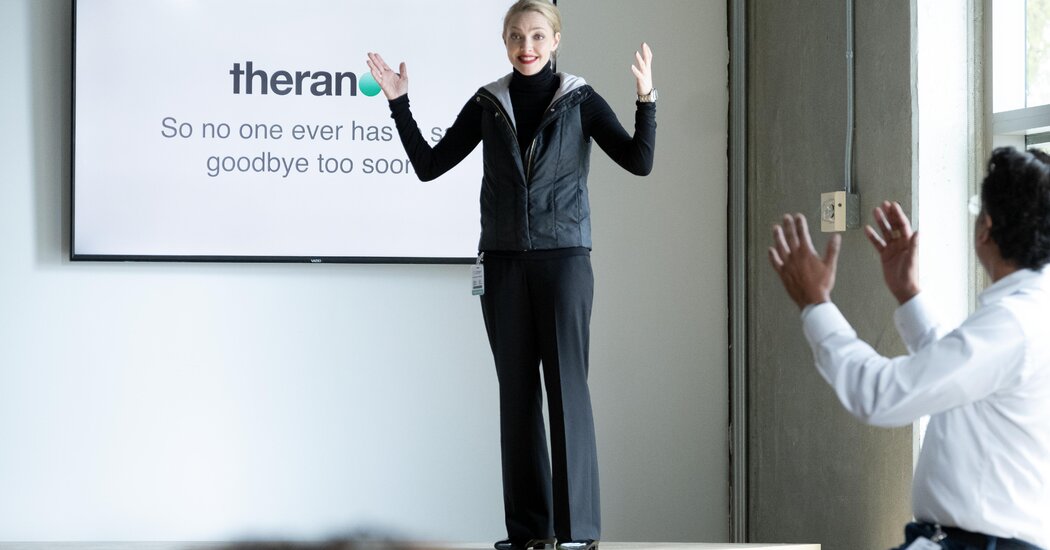 It started, inevitably, with the turtleneck.

In Amanda Seyfried’s first fitting for her role as Elizabeth Holmes in “The Dropout,” Claire Parkinson, the show’s costume designer, focused on the disgraced Theranos founder’s trademark top: a black Issey Miyake turtleneck pulled from the uniform of her idol Steve Jobs. The shirt doesn’t appear until halfway through the Hulu series, set to premiere March 3, but, Ms. Parkinson said, “we needed to figure out what we were building toward.”

She had found a vintage Miyake turtleneck and dupes from dozens of other brands. In the end, she went with a semi-synthetic number from Wolford.

“It had the perfect stretchiness that she could play with,” Ms. Parkinson said, referring to the fiddling and finger-worrying that Ms. Seyfried performs throughout the series, her jaw flexed and eyes held wide. Even as her voice deepens and her posture straightens out, Hulu’s Elizabeth Holmes looks consistently awkward and maladroit.

“I’d make Amanda scrunch up her face when I was applying her makeup,” said Jorjee Douglass, the makeup artist who reinterpreted Ms. Holmes’s clumpy mascara and cakey foundation.

Such details were essential to the construction of Ms. Holmes’s identity in Silicon Valley, from her initial investor meetings to her fraud trial, where she showed up with beach waves and a diaper bag. (Ms. Holmes was found guilty on one count of conspiracy and three counts of wire fraud, and will be sentenced in September.)

Elizabeth Holmes, the founder of Theranos, was found guilty of four counts of fraud in a case that came to symbolize the pitfalls of Silicon Valley’s culture of hustle, hype and greed. She is set to be sentenced on Sept. 26.

The costume team dressed Ms. Seyfried in versions of pieces that Ms. Holmes had been photographed in or that felt true to the story’s place and time period, from her 1990s Houston childhood up to 2015, when the Stanford dropout became a biotech titan worth billions.

Her wardrobe is filled with ill-fitting and unflattering secondhand pieces that Ms. Parkinson, who was nominated for two Emmys for her work on “The Politician,” sourced from eBay, Etsy, Depop, Poshmark and costume warehouses in Los Angeles, where she and her wife live part-time. The items are drab, the labels practical: Banana Republic, J. Crew and the like.

Ana Arriola, a former Apple designer who briefly worked at Theranos and staged an image intervention with Ms. Holmes when she was her boss, met with the show’s writers room. “She told us the story of how when she met Elizabeth, she was wearing Christmas sweaters,” Ms. Meriwether said. “We pressed her and we were like, ‘Actual reindeer sweaters?’”

It turned out Ms. Arriola meant pullovers with fair-isle and snowflake patterns, which appear on the show, before they’re swapped out for a shiny black replica of a Patagonia vest that Ms. Parkinson’s team made by hand.

While the overall look of the production is unflashy and heavy on earth tones, Ms. Parkinson let the surrounding cast stand in chic contrast to the central figure. Elizabeth’s mother wears Chanel and Tory Burch (Ms. Parkinson’s inspiration for her was Princess Diana), George Shultz (Sam Waterston) has “beautiful bespoke” suiting, and Ian Gibbons (the British chemist played by Stephen Fry) wears sweaters and trousers that telegraph taste and integrity. “Every single character had huge closets,” Ms. Parkinson said.

In her fittings with Ms. Seyfried, Ms. Parkinson sought to render something askew about the fit. “Most people look good in black,” she said. “So how can we make it not look good?” Her solution was to play around with the bunching, billowing and wrinkling.

Elizabeth’s wardrobe becomes more polished as the show progresses (out with the Gap, in with the Gucci!), but the pieces still sit oddly on Ms. Seyfried. “My goal here was to make it seem like it actually is a costume,” Ms. Parkinson said.

She was hired to work in the show in March 2020. Because of the pandemic, filming didn’t begin for a year and a half, over which Kate McKinnon dropped out as the lead and Ms. Seyfried stepped in.

Separately, Ms. Parkinson got married; bought an 1860s house in Litchfield County, Conn.; and dealt with a case of Covid-19 in March 2021, which forced her to pull out of a project that was shooting in Atlanta and send her sister, Lily Parkinson, also a costume designer and personal stylist, in her place.

When “The Dropout” began shooting in June 2021, Ms. Parkinson had spent more than a year mulling the inner life and outer appearance of Ms. Holmes. Wearing a uniform as armor has long been a favored strategy of women seeking respect in the male-dominated preserve of Silicon Valley. While men are encouraged to telegraph their nonconformist credibility via sweatshirts and soccer slides, women face pressure to look pulled together yet fashion agnostic.

Victoria Hitchcock, a Bay Area stylist, keeps a list of chic yet smart designers she suggests for female clients, including the Row, Stella McCartney and Saint Laurent. “I also have a list of designers I would not recommend my clients wear,” she said. “Things that are super-feminine and flowery” are big no-nos.

“I’m wearing an Ulla Johnson blouse right now, but I wouldn’t put that on somebody who’s wanting to exude confidence and knowledge,” Ms. Hitchcock added.

Ms. Holmes’s uniform of choice, which would become a punchline, started out as sartorial Soylent for someone who could not be bothered. Clothes were a nuisance to her, a point dramatized in a pre-turtleneck scene involving a pesky bra strap and a pair of scissors.

“‘Why’ was a word I kept asking myself,” Ms. Parkinson said of her time researching Ms. Holmes. “I was always like: ‘Why is she wearing that?’ They were all befuddling choices.” But one image struck her as looking the most natural: Ms. Holmes at Burning Man, wearing a bulky coat with a furry collar and oversize pink sunglasses.

“The thing I liked about that is that’s a costume, and it almost feels like she’s comfortable in it,” Ms. Parkinson said. “She’s completely happy and in her own world.”