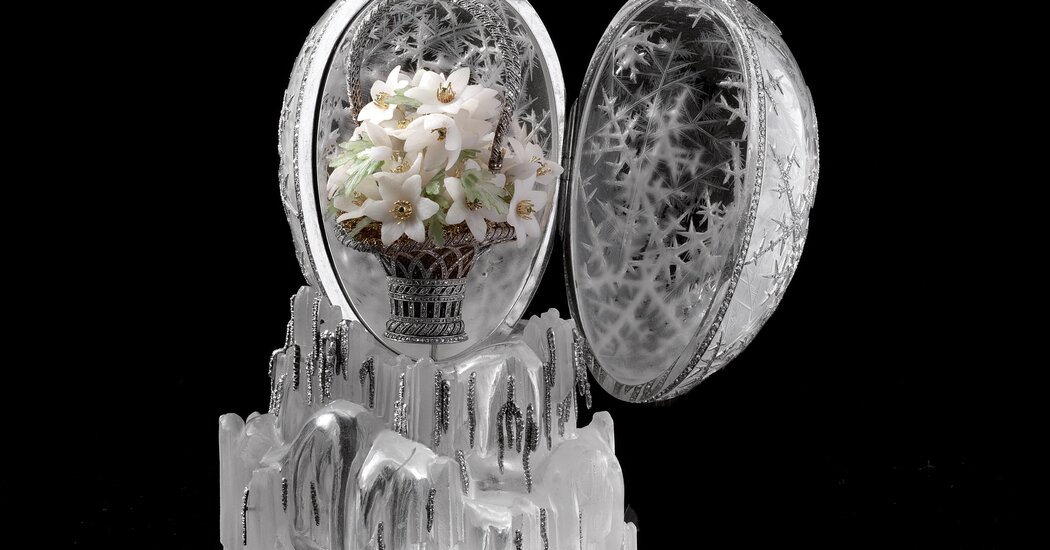 LONDON — The relationship between the jewelry house Fabergé and the opulent society of Imperial Russia has been widely explored in exhibitions and books. So “Fabergé in London: Romance to Revolution,” an exhibition scheduled to open Nov. 20 at the Victoria & Albert Museum in London (until May 8), has a different focus: the house’s prestige in British and international society.

“Fabergé was very much an Anglo-Russian enterprise and took Edwardian Britain by storm,” Tristram Hunt, the museum’s director, wrote in an email. “From London, Fabergé would plan overseas sales trips to Europe and the Far East.”

Comprising more than 200 pieces, the exhibition is to open with a display of Fabergé’s work for Russian society, its immediate focus after Gustav Fabergé founded the house in 1842 in St. Petersburg. There is, for example, a nephrite snuffbox featuring a miniature portrait of Czar Nicholas II and a rock crystal pendant designed by Alma Pihl, one of the house’s most celebrated artists.

The constant flow through Russia of the moneyed elite from Europe and the United States — including the financier John Pierpont Morgan and the heiress Consuelo Vanderbilt, who was the Duchess of Marlborough — and the acclaim that the house received at the 1900 Paris Exposition convinced Fabergé’s son, Peter Carl, that the house could expand beyond Russia.

In the exhibition, “the first part, ‘Fabergé in Russia,’ is the introduction to establish his character, almost a prologue to a play,” said Kieran McCarthy, the exhibition’s co-curator and a director at the London antiques dealer Wartski. “We then delve into the workshops, the craftsmanship, how things were organized to achieve flawless, beautiful extravagant works of art. We then tell the glittering story of Fabergé’s London branch, of its elevated clientele and joyful whimsy.”

Fabergé opened in London in 1903, which would prove to be the house’s only shop outside of Russia (it closed in 1917 when the Russian Revolution shuttered the house’s workrooms).

Exhibits also will include some pieces that the London store sold with the local clientele in mind, like hard stone boxes decorated with enameled scenes of British landmarks, and several animal statuettes, including representations of Edward VII’s favorite wire fox terrier, Caesar, carved in chalcedony, and his prized racehorse Persimmon, cast in silver.

The house’s famed Easter eggs are to be the show finale — several, including the 1913 Tercentenary Egg celebrating 300 years of Romanov rule in Russia, have never been displayed in Britain before. And Queen Elizabeth II has lent the Basket of Flowers Egg, which the czar gave to Czarina Alexandra Feodorovna in 1901.

“This show promises to be the most important exhibition on Fabergé in London since 1977,” when the Victoria & Albert held one to honor the queen’s Silver Jubilee, Alexis de Tiesenhausen, International Head of the Russian Art Department at Christie’s London, wrote in an email. “London museums do not have a wide selection of Fabergé pieces on permanent display so this exhibition will provide a rare opportunity to see a wide range of works.”