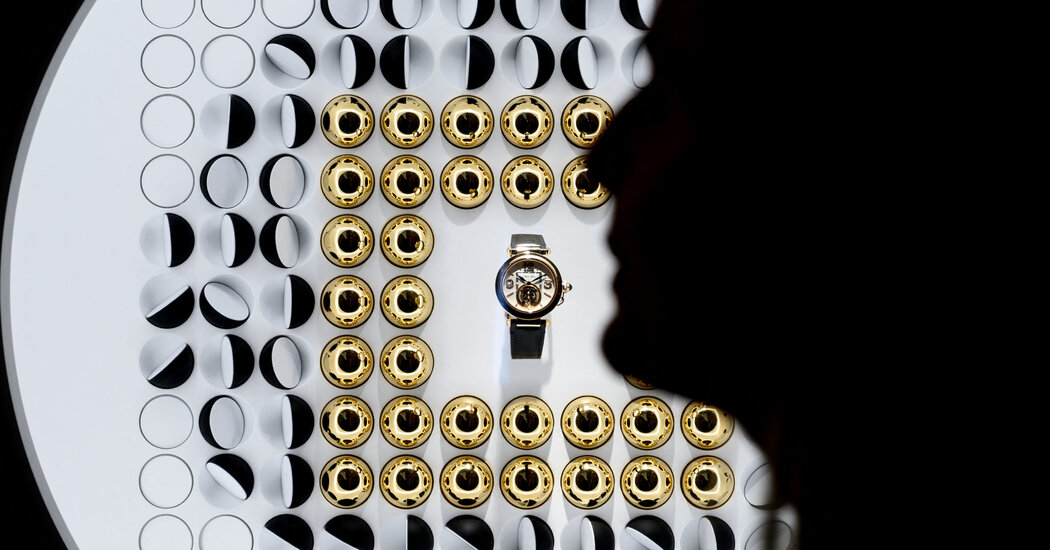 If retail stores were cities, the C.D. Peacock watch and jewelry flagship, scheduled to open in June 2023 at the Oakbrook Center mall in suburban Chicago, would be a metropolis.

Currently under construction, the store will fill nearly 21,000 square feet, or almost half an acre. Renderings of the gleaming white interior feature a bar, a lounge and a private event space designed to accommodate a seated dinner for as many as 45 guests, as well as several branded watch salons, including a two-level Rolex boutique with its own street entrance and nearby valet station.

“There will also be Omega and Tudor boutiques, and one of the biggest Cartier Espaces in the country, about 900 square feet,” Steven Holtzman, vice chairman of the 185-year-old retailer, said on a phone call in August. “It’s a big investment, and the timing is fantastic. Our business has been phenomenal.”

Many of Mr. Holtzman’s competitors probably would say the same thing. The Swiss watch industry is on track to have its best year ever. Brands across the price spectrum have reported record-breaking sales. And the growth is fueling expansion projects, like C.D. Peacock’s $20 million-plus construction, that suggest the good times are expected to last.

Yet some emerging signs indicate 2023 may not be entirely smooth sailing.

Resale prices of the hottest modern timepieces — chiefly the Rolex Daytona, the Patek Philippe Nautilus and the Audemars Piguet Royal Oak — have fallen by as much as 50 percent from their highs in January. The correction, which began in April, has spooked some buyers and sellers.

“If the iconic products from Patek, Rolex and Audemars are coming down to more reasonable levels on the secondary market, it shows the primary market is also cooling down a little bit,” said Oliver R. Müller, founder of LuxeConsult, a watch consultancy based near Lausanne, Switzerland.

“The business is not exactly running as usual,” he added. “There are a lot of uncertainties on the microeconomic side. Interest rates are going up. President Biden still doesn’t want to talk about recession. The signs are not too positive — but also not too negative.”

Among longtime watch industry observers, that kind of ambivalence is not unusual. In March 2020, no one could have predicted that the pandemic would jumpstart a period of skyrocketing growth. Swiss watch exports peaked in 2021 at 22.3 billion Swiss francs, or about $23 billion, 2.7 percent higher than in 2019, according to the Federation of the Swiss Watch Industry’s 2021 year-end report.

And 2022 is shaping up to be even better: Export values for the first six months of the year grew by 11.9 percent over the same period in 2021, led, in large part, by the booming American market, which saw gains of 31.4 percent.

So why is everyone so nervous?

Experts have attributed much of the mania of the past two years to investment-minded buyers flush with stimulus cash and crypto wealth. By regularly paying three, four or even five times retail value for hard-to-get models on secondary channels, they helped whip the market into a frenzy — until the crypto collapse in May halted the spending spree.

“All the speculators are running for cover,” Maximilian Büsser, founder and creative director of MB&F, a boutique watch brand that saw its business explode during the pandemic, said on a phone call. “Before Covid, our production was sold every year, sometimes 90 percent, sometimes 115 percent. And suddenly we had 25 times the amount of customers. It was utterly insane.

“Everything we produce is sold, but now it’s easier to get watches on the wrists of people who really like what we do,” Mr. Büsser added. “Because before, we had to start playing detective. Every single watch we were delivering we had to try and find out if the buyer was a real watch lover or somebody just trying to flip it.”

Mr. Holtzman echoed that sentiment. “We’re finding we have less clients coming in looking for opportunistic situations,” he said. “It’s a much better situation for us.”

What concerns many members of the Swiss watch trade today — even more than the war in Ukraine, rising interest rates, double-digit inflation and the looming prospect of recession — is the polarization that separates the top-performing brands from everyone else.

“You have probably five to seven brands who have nearly half of the business,” said Jean-Claude Biver, former president of the LVMH Watch Division and a longtime watch marketing executive. “And there’s a huge demand for them. But that doesn’t mean other brands have the same demand.

“Nevertheless, if you are looking for Brand A and you can’t get it, you are ready to buy Brand B, and that helps the industry,” he added.

There is no question that the trickle-down effect created by the extreme scarcity of certain steel sport watches (ahem, Rolex) has given a boost to similar-looking but more available models, such as the Laureato, a steel sport-chic watch introduced by Girard-Perregaux in the 1970s. But whether watchmakers can sustain that demand in the midst of a market reset is unclear.

Many watchmakers and dealers said they were optimistic about business over the next year because, despite the hasty retreat of speculative buyers, the industry has proved its resilience. Even with flagging demand in China and Hong Kong, the industry’s No. 2 and No. 3 export markets, the trade is still thriving, at both retail and resale.

“It is important to realize that prices are still expensive,” Sean Song, a rare and vintage watch dealer based in Kuala Lumpur, Malaysia, wrote in an email. “For instance, a stainless steel Audemars Piguet 15202ST with a blue dial — certainly a bellwether of ‘hype’ watches — trades at roughly the same price as it did last year, and is still multiples that of retail.”

That watch, the Royal Oak “Jumbo” Extra-Thin, retailed for $33,200 before Audemars Piguet discontinued it earlier this year. As of August, the model was selling for $90,000 to $105,000 on secondary channels.

Mr. Song also pointed out that the motivations driving his core clientele haven’t changed. “The collectors buying Daniel Roths and vintage Rolex were collectors before the current craze and will still be collectors,” he wrote.

But it is not just the high-end of the market that feels sanguine about the future. Watchmakers across the price spectrum said they believe that some people who were drawn to the category’s investment potential over the past couple years now realize they have a genuine passion for timepieces, and that will help sustain the industry through any economic turbulence that lies ahead.

“To be frank, there are going to be some slower moments in the next two to three years,” Etienne Malec, founder of Baltic, a five-year-old microbrand based in Paris, said by phone. “But it’s a conversion rate. Maybe 20 percent of the people who entered the market will keep a watch on their wrist that they didn’t have before.”

Then there are the scores of new buyers just discovering the luxury watch world through creative collaborations such as the Swatch Group’s enormously successful MoonSwatch collection.

Introduced in late March, the $260 quartz timepieces, which married the affordability and material innovation of a plastic Swatch watch with the design aesthetic and history of the Omega Speedmaster Moonwatch, caused a retail sensation when thousands of buyers swarmed Swatch boutiques around the world.

“Since then, they have probably delivered 150,000 MoonSwatches,” said Mr. Müller of LuxeConsult, a former Omega executive. “By the end of this year, it will probably be half a million.

“The extraordinary thing that happened with the MoonSwatch,” he added, “is that all these young people were lining up in the street because it was cool, colorful and based on an iconic product with a very cool history.”

But when those newcomers to watches become more mature buyers over the next decade, will the industry still offer them choices among the hundreds of brands that currently compose the ranks of the Swiss watch trade? Many experts fear the answer is no, as consolidation and the increasing dominance of the so-called Big Four (Rolex, Patek Philippe, Audemars Piguet and Richard Mille) threaten to squeeze out smaller watchmakers.

“Sometimes you will have a newcomer, like Richard Mille 20 years ago, finding its place and becoming a blockbuster, but those will be the rare exception to the rule,” Mr. Müller said.

“Unlike what many people think, there is not space for everyone,” he added. “There is space when the market is booming, when money is flowing, but now the tide has turned. The natural selection has been quite tough and will be tougher in the next 12 to 24 months. It’s not all negative, but we have to be realistic.”