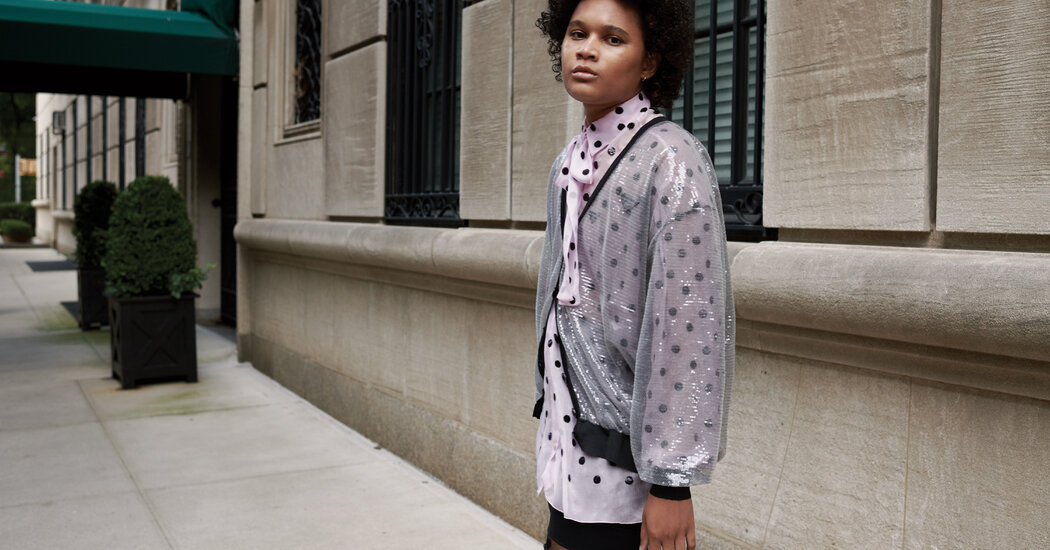 IN THE SPRING of 2020, Jeremy Scott abandoned his plans for Moschino’s resort collection and began again from scratch. The Covid-19 pandemic was already overwhelming hospitals in Europe and, in a show of solidarity, the American creative director decided to refocus, he said at the time, on “finding creativity and positivity, and trying to keep being upbeat about it.” It is no surprise, then, that the cotillion of party dresses and power jackets he presented began with an ode to a pattern that tends to elicit smiles: As small as pennies or as large as ice cream scoops, polka dots appeared printed across ruched, ’80s-inspired dresses and abbreviated pencil skirts in a cacophonous clash of exuberant colors.

Though a staple of Central European folk art, and named for a dance popularized in mid-19th-century Bohemia (now part of the Czech Republic), polka dots have played an outsize role in defining America’s national identity over the past century. For a country constitutionally preoccupied with happiness, the print has proved a useful and recurring signifier of optimism, especially when it seems furthest from reach. Polka dots are the uniform of the ever-perky Minnie Mouse, and of a relentlessly high-spirited Shirley Temple in 1934’s “Stand Up and Cheer!,” released in the midst of the Great Depression. During World War II, when Westinghouse Electric produced a poster to boost the morale of female workers, it depicted a factory employee with her hair wrapped in a red polka-dot scarf, ready to get the job done. (The refined New Look — rounded shoulders, cinched waist, billowing skirt — that Christian Dior developed in the postwar years was in many ways an expression of European distaste for Rosie the Riveter’s earnest vigor.) By the 1950s, polka dots had come to symbolize, for better or worse, the dogged cheer of midcentury America. Marilyn Monroe and Lucille Ball wore the print with such frequency that it became the visual equivalent of apple pie — comforting but predictable — and in Billy Wilder’s 1961 political satire, “One, Two, Three,” East German Stasi officers torment a suspected spy by playing, on repeat, a caterwauling version of the 1960 Brian Hyland song “Itsy Bitsy Teenie Weenie Yellow Polkadot Bikini.” Too much of a good thing can be wonderful; it can also be torture.

IT’S NO COINCIDENCE that, as we begin to reconfigure life after a devastating pandemic, we’re once again thinking about, and wearing, spots. Though the pattern hasn’t always been so lighthearted — in medieval Europe, dotted fabrics were largely avoided because they called to mind handkerchiefs speckled with blood: a sign of diseases such as syphilis, smallpox and the bubonic plague — designers have long harnessed polka dots’ more buoyant connotations in trying times. Following the stock market crash of 2008, Marc Jacobs conjured in his fall 2009 collection the halcyon nights of his youth by pairing mohawks with punk-inflected polka-dot brocades, while Nicolas Ghesquière, then at the helm of Balenciaga, lightened the mood by applying tidy, paintbrush-dipped spots to sophisticated velvet dresses.

In 2021, too, we are attempting to transform a period of pain and loss into orderly, manageable symbols of joy and strength. For Valentino’s fall 2021 collection, Pierpaolo Piccioli showed uniformly spotted minidresses that evoked the strict, linear quality of Damien Hirst’s hand-painted spot series. For his namesake line that same season, Raf Simons sent out models in polka-dot-patterned oversize tunics and chunky knits whose armorlike silhouettes were impervious to the cinch of the skeleton-hand-shaped bangles Simons used to accessorize them. And amid a procession of gothic ensembles indebted to both Björk and the 1987 horror film “Hellraiser” (many of the looks were covered in stainless-steel spikes), Kei Ninomiya incorporated polka dots into ensembles of puckered organza, a nod, perhaps, to a desire for familiarity in an age of social distancing. For resort, Demna Gvasalia punctuated his otherwise monochromatic collection for Balenciaga with a hint of bright, beautiful red, seen beneath a flowing polka-dot dress worn lank on the body. And at Prada, for the brand’s December 2021 offering, spots were strewn over sheer mesh tote bags and silky pussy-bow blouses, conveying, according to the press release, “an opulent optimism — of event and occasion, of people convening in joy, dancing again.”

But few designers have put the polka dot to work quite like Carolina Herrera, whose line has used the print to keep its party-ready spirit alive since 1981. For the spring 2022 collection, and in honor of the brand’s 40th anniversary this year, the designer Wes Gordon, who took over as creative director in 2018, looked back to the label’s beginning: In homage to a voluminous polka-dot chiffon gown with a tight bodice modeled by Iman in the line’s spring 1983 runway show, Gordon presented a near replica, this one hand-embroidered with thousands of tiny black sequin flowers to create a similar, if slightly more solemn, effect. “At the house of Herrera,” he says, “polka dots are basically a neutral. I like to think of them as the comedians of prints because they’re so versatile and whimsical.” Like the best comedians, though, polka dots often mirror back to us not only the joy of experiencing a shared connection but also the very uneasiness we turn to them to relieve.