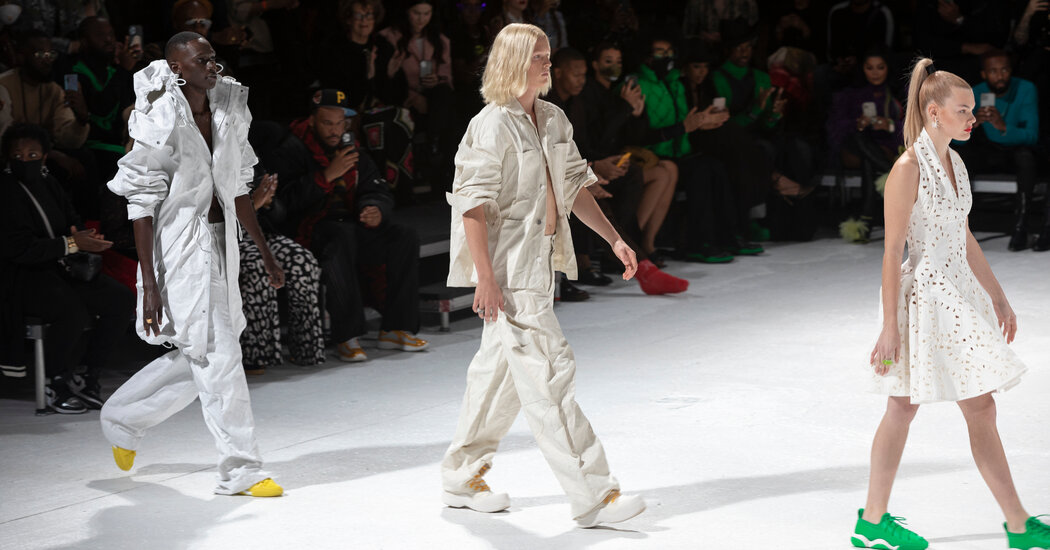 DETROIT — Around 2015, when Daniel Lee was a designer no one had ever heard of, working behind the scenes at Celine, he went on vacation to Jamaica, somehow ending up in Detroit along the way.

He didn’t know that much about the city except the obvious: It had a history with cars (which he loved), and as the birthplace of techno music (ditto, ever since he was a kid). He became, he said, “obsessed.” He had been thinking about it ever since.

Six years later, now the much-celebrated creative director of Bottega Veneta, he came back. With a chunk of the fashion world, a scattering of celebrities and the attention of their social media followings in tow. Most of them admittedly scratching their heads in befuddlement about what, exactly, they were doing there at the behest of an Italian luxury brand.

But what’s the point of having power, if you can’t use it for a teachable moment or two?

The occasion was the Bottega Salon O3 show: the third in the brand’s dual-gender, season-nonspecific fashion shows held outside the usual ready-to-wear schedule and often outside the usual show cities. (01 was in London; 02 in Berlin.)

It also marked the opening of a pop-up Bottega shop in a former firehouse, one that would showcase not just Bottega stuff but also furniture and ceramics from local artists, along with vinyl from the Underground Music Academy and a display of publications from the Black Art Library. Even if parachuting into a city that has faced many financial struggles with bells and whistles and bags that sell for thousands may seem a little incongruous.

The idea, Mr. Lee said, standing in a scrum of people after his show, practically bouncing on his toes with excitement, was to shine a light on not just his own work but also on “the greatness of this city.” To effectively one-up the usual litany of hackneyed collection “inspiration” and not just name check whatever artist or place or film planted the seeds of a collection in the designer’s mind but give credit directly where credit was due. He would take the show to the source, rather then simply appropriating it.

He hoped to create, he said, “an American moment,” forcing people who may not see beyond the myopia of New York or Paris or Milan to learn something new. Not just about a city they may never have visited, but about where creativity comes from in the broadest and most personal sense — and the often unexpected connective tissue that binds it.

Sometimes fashion can do that: join up the dots between cultures and ideas in suddenly revelatory ways and through seemingly innocuous forms. That’s the goal, anyway. Even if it can seem an awfully long way from Milan to Michigan.

Or rather, the Michigan Building Theater: the ornate movie palace-turned-car park where the show was held amid the peeling layers of the structure’s once glamorous past.

Where guests included not just Mary J. Blige and Lil’ Kim and Kehlani, but also local figures like JJ and Anthony Curis, founders of Library Street Collective, a gallery that is at the center of the local art scene, and the designer Tracy Reese, who a few years ago abandoned New York Fashion Week to start a label in Detroit. Where most of the models were local and formed an entire, realistic panoply of different shapes and sizes.

Where Moodymann, a techno deity, created the soundtrack (he was also a star attraction of the after-party), and where Carl Craig, the D.J. and another one of the seminal figures in Detroit’s techno evolution, designed an immersive sound and light installation for a cocktail party held in the concrete underbelly of the garage after the show.

And where the collection itself turned out to be, perhaps, the most evocative and potentially resonant variable of all. Mr. Lee grabbed the clichés of American sportswear — parkas, denim, track suits, tennis dresses, sneakers — and re-engineered them, fine-tuning the details till they hummed.

He wove metal, literally, into canvas and cotton, so collars and shoulders were scrunched up into sculptural shapes that transformed the simple act of pushing up a sleeve into the puffy, graceful ghost of couture. He knit skinny suits out of crosshatched checks to resemble the signature intrecciato weave of the brand’s bags, and he rubberized yarn (also beads) so the surface of a little knit dress had the texture of a gravel drive. Paillette-strewn halters seemed covered in tiny headlights.

He doused little body-con polo dresses in crystals and wrapped technical toweling into columns. Some fabrics had the glossy sheen of enamel paint. There was a lot of bright Bottega green, with pops of orange and chartreuse. It all had the allure of a very high-quality, idiosyncratic machine dream.

If the messaging wasn’t entirely consistent — Bottega still doesn’t have a permanent store in the city; Lourdes Leon walked the runway alongside all those new faces; a preshow tour of “local” design landmarks included a famous modernist house … in the upscale suburb of Grosse Pointe — at least it had ambition.

And it made sense out of how a boy from the industrial north of England creating a renaissance in an Italian luxury brand could legitimately find, in a Midwestern American city undergoing its own renaissance, a tie that binds.