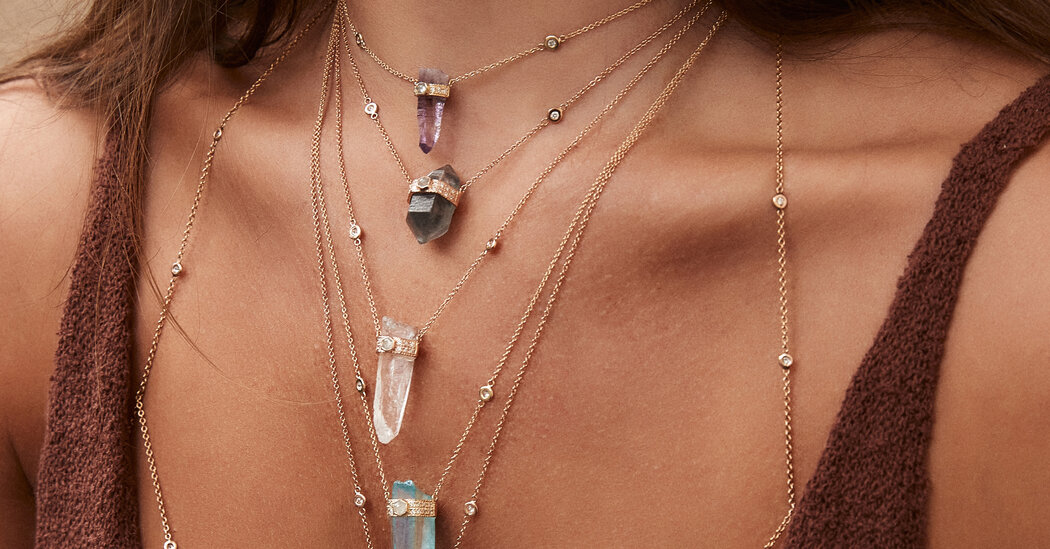 LOS ANGELES — At a time when wellness is at the forefront of many people’s minds, crystal, rock crystal and gemstone jewelry has been experiencing a renaissance.

During anxious times, “we look to what has great symbolizing and healing powers,” said Rebecca Selva, chief creative officer at Fred Leighton and Kwiat, “what for centuries and since ancient times was thought to have certain qualities of healing, grounding and positivity.”

And several jewelry designers and makers say they are seeing the results.

“We’re exploding at the seams” when it comes to sales, said Jacquie Aiche, the Los Angeles-based fine jewelry designer. Although Ms. Aiche has been incorporating crystals into her jewelry since the introduction of her namesake brand in 2003, she said sales of her crystal pieces more than doubled in the first half of 2020, “then plateaued at the spike and is still holding.” (The company is privately owned; Ms. Aiche won’t reveal revenues, but her crystal pieces range from $2,000 to $25,000.)

In addition to her Healing Crystals line of necklaces, which combines elements such as clear quartz, amethyst and topaz with diamonds, Ms. Aiche said her body jewelry line, including diamond-encrusted halter bras and body chains, also had “surged.” And in August 2020 she debuted her first men’s line, which includes necklaces and charms featuring crystals, because “men were feeling left out when they came in with their ladies.”

During the interview, Ms. Aiche sat at a square wooden table — in what used to be the garage at her Beverly Hills bungalow, but now is a workshop and studio — scattered with necklaces, a book on crystals, a large bowl full of chocolates and a bouquet of pink and red flowers.

“I don’t sell jewelry, I sell energy,” she said, “and there’s this evolution of people searching for something they can connect to and feel better.”

Examples of rock crystal jewelry can be traced as far back as the Sumerian and Mesopotamian civilizations. And, “pre-Columbian Indigenous people in the Americas were using nuts and beads with the same sort of mind-sets, that certain things could help protect you,” said Sara Payne Thomeier, Head of Jewels for the Americas at Phillips auction house.

Not only is there now increased interest and awareness of the potential remedial properties of natural earth elements like crystals, but “it’s more normalized and mainstream,” Ms. Thomeier said. “I think back a few years ago; those who alluded to healing powers were perceived as a bit hippy-dippy and were bashful to mention it. It’s not embarrassing anymore to present the idea and show you have some faith in the possibility that these things can have healing powers.

“In fact,” she added, “it can be a particularly powerful sales tool” for jewelry designers, salespeople and marketing executives alike.

For several months in 2020, the high jewelry designer Ana Khouri, who usually is based in New York, stayed on her farm in her home country of Brazil, hand-carving pieces for her newest exhibition and working on her nonprofit organization, Projeto Ovo, which generates money for about 80 Brazilian charities by selling donations of used clothing and accessories.

“I had time last year,” Ms. Khouri said, “and the relationship between rosewood, which is now extinct, and crystals, and the inherent tension of the materials and magic was what I focused on.”

Of the 17 one-of-a-kind pieces that comprised her November show at Sotheby’s New York, 15 had crystals, the first time she had used them in her work. The creations, which sold out, included a minaudière made of carved rose quartz and a Fairmined gold necklace with a total of 5.54-carats of pink and white diamonds, crystal, rose quartz and amethyst.

“Since this exhibition launched, the response I got is so incredible,” Ms. Khouri said. “It opens a path for crystals to be more accepted in high jewelry.”

The notion of feel-good jewelry is something that Temple St. Clair has been channeling for nearly four decades. The New York-based designer made her first rock crystal amulet in 1986 after being inspired by an amulet in the collection of Lorenzo de’ Medici, the 15th-century Florentine statesman.

“During this pandemic period there was, of course, a little bit of panic,” Ms. St. Clair said. “Everything now is flooding back and people are looking for some connection. People want a personal meaningful object.”

In a video interview from her SoHo studio, she declined to specify her revenue but noted that her sales this year had surpassed her prepandemic numbers and that her clients were increasingly comfortable buying online. “This is not a gift business. People are buying my pieces for themselves; they are choosing one that speaks to them personally,” she said, adding, “we can’t keep certain things around.”

Her namesake company is known for its rock crystal amulets that incorporate designs such as mandalas and diamond pavé beehives in 18-karat gold, with prices from $1,000 to $25,000.

“There’s no question within the category of gemstones, minerals, crystals and rock crystals, there has been a huge, huge increase in interest,” Ms. Selva of Fred Leighton said. Case in point: While on the phone, Ms. Selva walked into her chief executive’s office only to discover a newly installed giant amethyst geode. “This is not a trend, it’s more than that.”