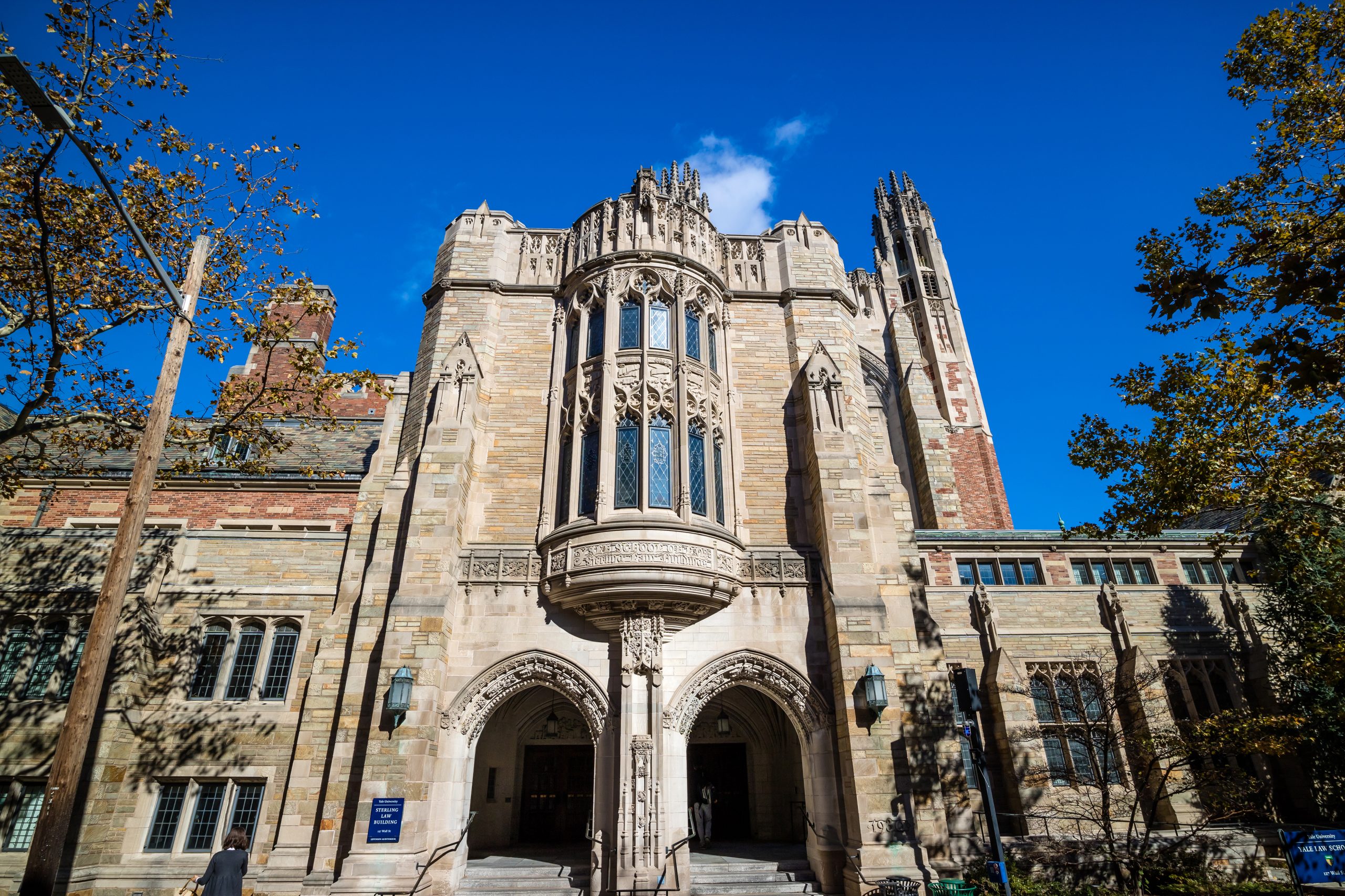 Law students are not children. Most are in their mid-twenties, with college degrees and some work experience on their resumes. They are daily expected to show up to class on time, make sense of complex and occasionally upsetting topics, and arrange their schedules so they can complete their assignments while managing other responsibilities. Some law students are married with children.

But Yale Law School (YLS), like so many other institutions with a deeply ingrained progressive ethic, insists on treating its students like children. This is abundantly clear from the scandal surrounding YLS’s response to an email sent by YLS student Trent Colbert. This debacle provides a particularly good illustration of how our elite institutions are failing not just their students, but a country that depends on them to produce good citizens.

Many observers (and YLS dean Heather Gerken herself) have framed l’affaire Colbert as a free speech issue. It is. But more fundamentally, it is about how YLS—the top law school in the country, a model of elite production—encourages and reinforces juvenile behaviors, forming the opposite of the kinds of citizens a republic needs to survive. For that, it is rightfully being raked over the coals, and should be hounded until it commits to substantive changes.

To get a complete sense of the Kafkaesque details of the story, it is worth consulting Aaron Sibarium’s bombshell reporting at the Washington Free Beacon and listening to Colbert’s conversation with YLS administrators in full. But in short, Colbert sent an email inviting fellow students to a party, using several terms, including “trap house,” not widely known to have any offensive connotation. Some students, however, took offense at “trap house” (especially, as some later complained, in light of Colbert’s mention of the conservative Federalist Society) and reported Colbert to YLS administrators.

Colbert was quickly called to meet with YLS’s associate dean and diversity director. They told Colbert that his word choice was offensive because “trap house” was a kind of “blackface,” connoting crack, hip hop, and other unflattering affiliations with black people. Such offense was “compounded” by a reference to Popeye’s fried chicken, which “is often used to undermine arguments that structural and systemic racism has contributed to racial health disparities in the U.S,” and Colbert’s mention of the Federalist Society, which “was very triggering for students who already feel like FedSoc belongs to political affiliations that are oppressive to certain communities.”

The administrators repeatedly suggested that he should apologize, on pain of YLS possibly impugning Colbert’s reputation within the legal profession. The diversity director drafted an apology on Colbert’s behalf expressing that Colbert would “actively educate” himself so he can “do better.” When Colbert declined to send the apology, the administrators sent a class-wide email “condemning” his “pejorative and racist language.”

The focus on free speech obscures some aspects of the story—ones that are troublesome in their own right because of the characteristics they tend to encourage in a rising generation of lawyers.

First, the YLS students who were upset by Colbert’s email knew to go right to the administration with their complaint. They knew that the most effective avenue for redress of their grievances would not be confronting Colbert but reporting him.

Second, the administrators vindicated that decision. Colbert, to his credit, continuously offered to meet his peers for an exchange of perspectives. The administrators, further infantilizing YLS students, rejected offhand the possibility of constructive dialogue between offended and offender, claiming that a call for discussion put the onus on minority students to defend their perspectives in a way that would be harmful to them. After Colbert stood firm, insisting that a conversation between self-respecting adults would be preferable to a forced apology, the administrators went ahead and denounced him. By sending a message to all law students taking a side in the dispute, they confirmed that students had been right to report Colbert to the authorities.

Third, YLS left Colbert with two choices: Apologize or suffer the consequences of being deemed (by students and administrators alike) a racist. He was not given a fair chance to put his side of the story on equal footing with his accusers’ in the public eye. YLS afforded him a quasi-judicial proceeding where he was allowed to present his case to the adjudicating administrators, not to air his side of the story in an adversarial manner against his accusers in the traditional manner of trials. Worse still, the administrators tried to coerce an apology that Colbert clearly did not believe was warranted.

The infantilizing nature of campus “safetyism” and its ill effects on students have been explored at great length. What is so shocking about this incident, though, is how close these students are to being powerful, wealthy, elite members of American society. The institution training them either has not considered or does not care that if a nation followed its example, it would quickly collapse.

What does a free society need to survive? For one thing, it needs peaceful resolution of disputes. This serves multiple purposes. The first is obvious: Without peaceful and legitimate dispute resolution— with both sides free to air their perspectives before a trustworthy impartial arbitrator—there will be violent and illegitimate dispute resolution. A free society will spawn disputes and cannot shy away from providing mechanisms to resolve them. But those mechanisms must be transparent and fair if they are going to supplant more traditional forms of conflict resolution—such as “might makes right.” Under that principle, power reigns supreme and the individual liberty of the common man—a miraculous achievement we tend to take for granted—is impossible.

Second, to paraphrase Jonathan Rauch in his recent book, The Constitution of Knowledge¸ channeling dispute and debate into a public good has been one of the great miracles of the free world. It occurs when the logic undergirding competing visions of truth collide, each is put to the test to see how well it withstands the real world and how well it produces desirable norms, and a critical mass is able to observe and assess the result. That is how debate turns into knowledge, acceptance of which is a keystone of peaceful shared lives. There is no public peace—much less steady administration of law—in a world where no one can agree on what is right and what is wrong.

Adults in a functioning free society settle their differences by arguing them out, not by pretending that there is no dispute. The backbone of a healthy liberal society is John Stuart Mill’s conviction that the collision of good and bad ideas will, in the long run, redound to the benefit of all.

In light of these observations, YLS’s dereliction of responsibility as a citizen-producing institution is stark. YLS’s goal in handling this situation seemed to be ensuring that the colliding sides never had the opportunity to sort out their differences. Rather, its administrators did precisely what one would expect from an institution seeking to tear down a republic. They took several steps nearly calculated to eschew Mill’s principle, reinforcing the propriety of reporting one’s peers to authorities and coercing groveling apologies behind closed doors.

Liberal education—especially in the law—serves the important social function of preparing professionals who will soon enjoy immense power and responsibility. To that end, educational institutions must encourage arguments that enrich the public conception of what is good and true. But to be productive, these arguments must occur in the bright light of day, with adversarial (but peaceful) opportunities for Colbert and his accusers to air their sides of the story, explain why their view of things is in better accord with the world have (and the one we want to live in) and persuade their community that they are in the right. That is precisely what law school graduates will soon find themselves tasked with doing in the courtroom. (YLS graduates are likely to do the same thing in law journals and judicial opinions.) Instead, they are being encouraged to favor the Star Chamber.

YLS students can and should be mature enough to handle the distinctly republican problem of encountering words, views, and ideas they do not like. But even if they are not yet, YLS should actively train them to be. Classes on legal theory and political philosophy can explain in the abstract why a free society will crumble without citizens willing to suffer those whose expressions they find abhorrent—or in this case, merely distasteful. But a responsible institution will see teaching moments—opportunities to practice pluralism and inculcate the habits of a free and peaceful people—when conflicts arise. By stifling conflict, and by broadly encouraging behaviors that corrode coexistence among fundamentally different people, the school has ill-prepared its graduates to be worthy republican elites.

This is a serious problem because key American institutions need worthy stewards. “The question is not whether elites shall rule,” observes George Will, “but which elites shall, so the perennial political problem is to get popular consent to worthy elites.” This is particularly true of lawyers, who play an outsized role in the institutions that mediate our coexistence, from administrative agencies to courts to civil society. At their best, law schools produce elite citizens attuned to the challenges of a free society and worthy of popular consent to their influence. Those challenges demand certain virtues—patience, tolerance, compromise, and willingness to live peaceably among fundamentally different people—that reassure all citizens that elites are stewarding the republic, not abusing or undermining it. What the Colbert scandal demonstrates is that elite institutions are doing largely the opposite, encouraging and reinforcing vices that tend to hasten a republic’s decline and fall.

YLS deserves every bit of heat it has received, and more. Whether it abridged Colbert’s right to free speech or not is beside the point. What’s more important is that it is doing a disservice to the free society necessary for it and its graduates to flourish. Americans ought to be concerned about YLS until it commits to rediscovering its role as a formative force of worthy elites. Until it does, YLS—like so many other institutions captive to the animating ideology of infantilizing its students in the name of progressive piety—will continue to fail not just its students, but all of us.